After an overnight stay at the St. Regis Doha, we headed in an Uber to the airport to catch our flight to Malé as we continued our journey from LAX. The sunrise was amazing on our drive to the airport. Security and passport control was quick @ DOH. As Qatar was going to host the World Cup, they had some items setup in the terminal including a massive soccer ball in the same area as the $7 million 23-foot teddy bear so we snapped a few photos. We were then on our way to the Qatar Airways Al Mourjan Business Lounge. The lounge was very busy so we had to wait for a seat in the restaurant upstairs. After about 20 minutes, we were seated and opted for a mimosa to start the adventure down to Malé which is a 4 hour flight from Doha. The view from the restaurant in the lounge was nice as it overlooked the tarmac. It was a quick stop at the Lounge before walking 20 minutes to our gate which had a bus to take us out to a remote stand where our plane was waiting for us.

We were flying on a former Cathay Pacific Boeing 777-300ER today which Qatar Airways wet leased a few of them from Cathay and serves primarily the DOH<->MLE route. I’d flown Cathay Pacific Business Class many times before so I knew I was in for a great seat experience. The load was very light on this 8AM flight to Malé with only 8 guests in Business Class which holds 53 guests. First Class was sold out with a Qatari family booking it the night before and showing up in private Audi A8’s on the tarmac to board the plane.

Audi A8 Transfer for First Class

During takeoff, we were able to get a great view of downtown Doha which was still under development for the World Cup. Breakfast was offered, but I decided to have it later in the flight as I had breakfast at St. Regis Doha earlier and needed to sleep. The seat converts into a comfy lie-flat bed and I was able to get a 2 hour nap. 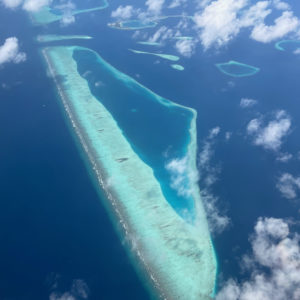 WiFi was offered at a flat rate of $10 for unlimited usage and was plenty fast just as I had on the A350.

We landed into Malé on time and were bussed to the terminal for immigration. Due to changes during COVID, there was a new QR code required to enter Maldives. This was new to me since I last visited in 2017 so it caught me off guard when immigration denied my entry and instructed me to connect to the WiFi to fill out the required paperwork to generate a QR code. It was very tedious to complete on a phone, but we were on our way in about 30 minutes.

Overall: I enjoyed flying the former Cathay Pacific plane with lie-flat beds, but if they offer QSuite planes then definitely opt for that if you are flying Business Class.