Earlier this year, I found award availability on Qatar Airlines in Business Class using Alaska Airlines miles for 85,000 one way from LAX to MLE via DOH. An amazing redemption to fly to the Maldives again in style 🙂 I had my eye on Le Méridien Maldives since they opened last year so this was a perfect match. The LAX to DOH route is served by Qatar’s A350-1000 which features QSuite in Business Class. QSuite is what sets Qatar’s Business Class apart from any other airlines right now. They offer a quad configuration where 4 people can fly together in the same pod. Qatar Airways planned 2 flights from LAX to DOH on the same day, but later consolidated the flights so we had 3 Business Class award tickets locked in for the same flight which is very rare. Closer to departure a friend purchased a Business Class ticket to complete our pod of 4 🙂 This was a once-in-a-lifetime experience! Since 2017, QSuite has been on my bucket list and now it was time to test it out.

We arrived to LAX around 3 hours prior to our departure and found the check-in area in TBIT which didn’t have a wait. The gate agent checked all 4 of us in at the same time making the process very simplified. She was very helpful in locking in better seat assignments as we only had 2 of the 4 seats (3E & 3F) needed for “the quad”. We ended up with 3 of 4 seats (9E, 9F & 10D) assigned with the final seat (10G) to be negotiated with the passenger on the plane if she didn’t talk to them prior to the flight. It would be an easy feat if they were traveling by themselves as the seat being swapped for 10G was 3A which is one of the best window seats on the plane. After checking in, we proceeded to the Oneworld Business Class Lounge which was busy. The staff was very nice and excited to see so many people back traveling these days. I grabbed a quick shower which was perfect prior to jumping on the 16 hour flight to Doha. We all grabbed a drink to kick off the trip. 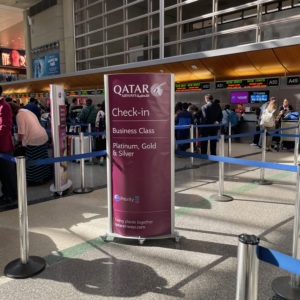 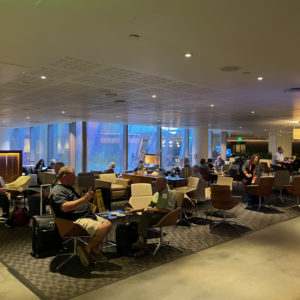 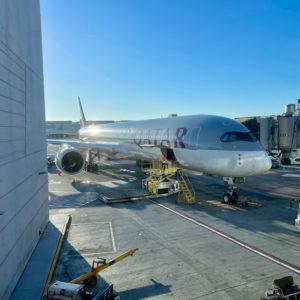 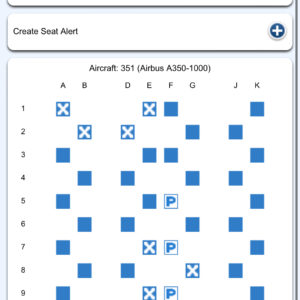 Boarding the flight was seamless as they had a dedicated Business Class lane. Upon boarding, I spoke with the flight attendant around the seat assignments. She was OK with me swapping as long as the passenger in 10G was willing to swap. I spoke with the passenger in 10G and he was more than willing to switch 🙂 “The Quad” was secured. We settled into the seats and were served a pre-departure beverage. Charles Heidsieck Brut Reserve and Taittinger Prestige Rose were offered as Champagne options. Cheers! 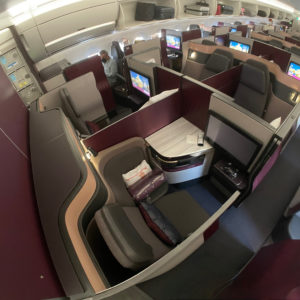 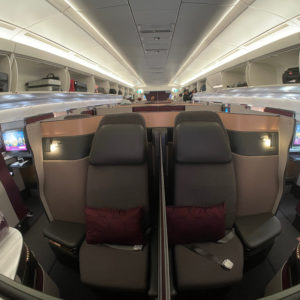 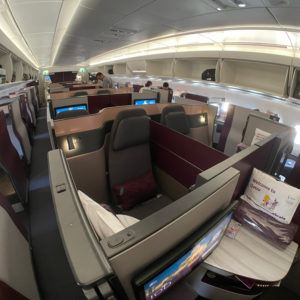 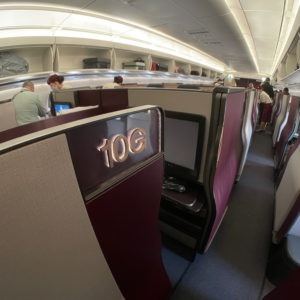 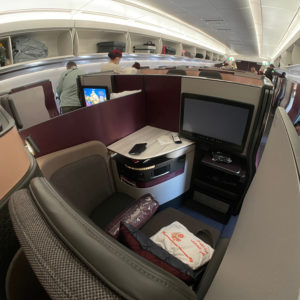 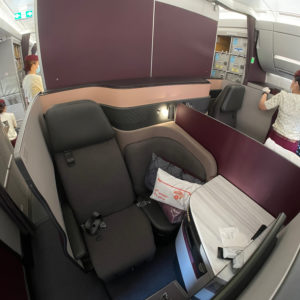 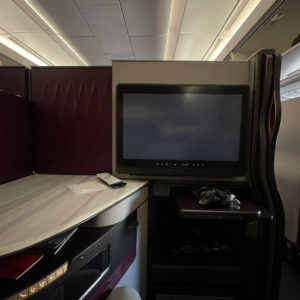 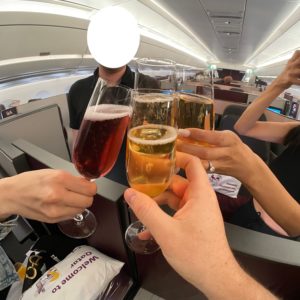 We were ready to go to Doha! Flying in QSuite seats would make this 16 hour flight fly by. The mood lighting was tastefully done as well. Watching the tail camera during takeoff was very cool as we departed LAX. 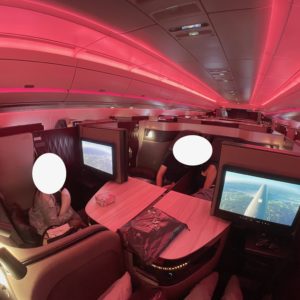 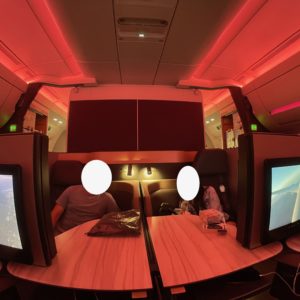 After takeoff, warm nuts and drinks were served. I opted for an Old Fashioned. As it was an evening departure, dinner was served shortly after takeoff. It was a multiple course meal. Lobster with caviar was served as the amuse-bouche. Yum! I then tried the Kataifi prawns which were OK. The crispy batter could be crispier, but we were on a plane so hard to critique their preparation. For my main, I selected the grilled duck breast which was average. It was a bit dry. Finally for dessert, we were served the crispy chocolate bar with mango. This made up for the past 2 dishes. It was amazing! Fresh fruit with a light crispy chocolate finished the meal service on a positive note. We were about 4 hours into the flight and with limited sleep the night before it was time for bed. I went to change into my Qatar Airways World Cup PJ’s and the flight attendant made my bed. The lie-flat bed was super comfy with plenty of pillows. The QSuite doors close to enhance privacy as well. I ended up sleeping a solid 9 hours which might be the longest I’ve ever slept continuously on a plane. 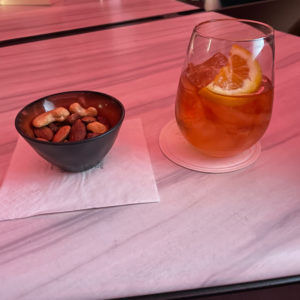 Warm Nuts with an Old Fashioned 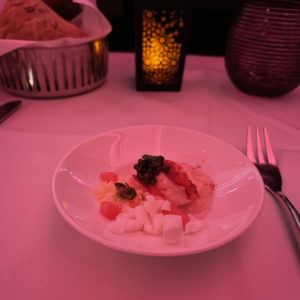 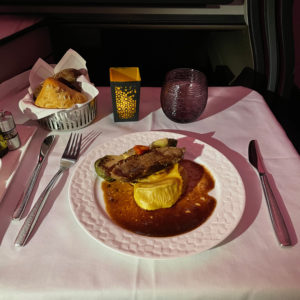 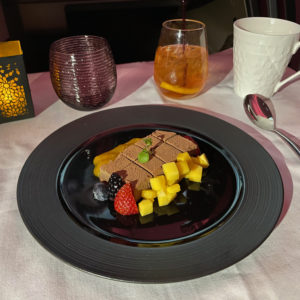 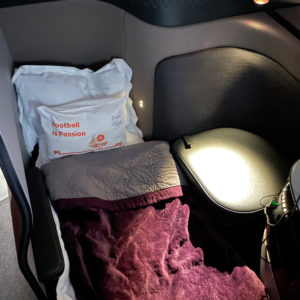 The A350-1000 is Qatar Airways newest plane which offers the latest inflight connectivity options including HDMI, NFC, Camera Views and WiFi. I was able to try out the Camera Views and WiFi. The tail camera was my favorite as it provided a birds eye view of the plane while inflight. The WiFi was only $10 for unlimited usage. I was able to quickly pay for it via Apple Pay which is how all airlines should offer payment these days. Who wants to type in their credit card # while inflight? The speeds were plenty fast at around 22Mbps down and 2 Mbps up. Staying connected on a 16 hour flight is well worth the cost. 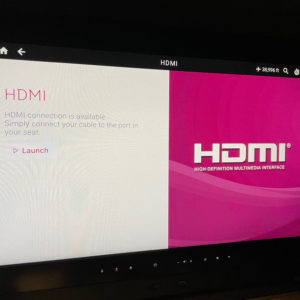 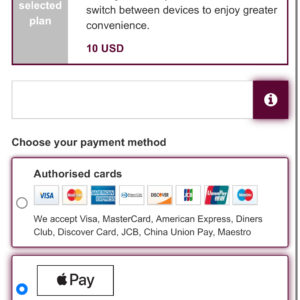 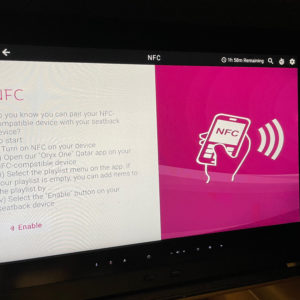 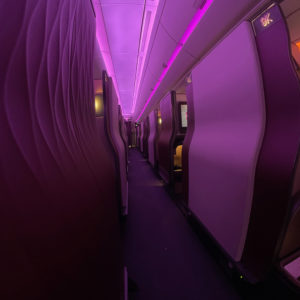 Prior to landing into Doha, we were served breakfast. I selected for the Wild mushroom omelette which was served with chicken sausage. I needed some protein to power us through a quick 12 hour city tour of Doha. The raspberry and blueberry smoothie was tasty as well. Diptyque amenity kits were included in the storage compartment at our seats which had some lotions and lip balm which came in handy. As we were preparing for landing, a box of chocolates were served. Nice touch by Qatar Airways to end a near perfect flight! 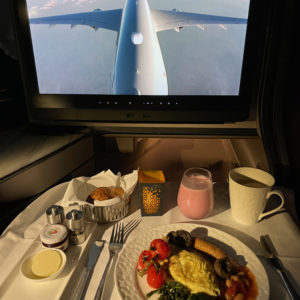 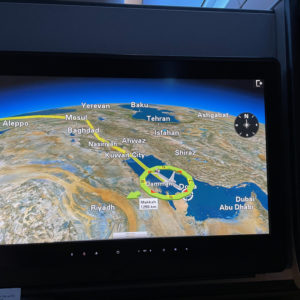 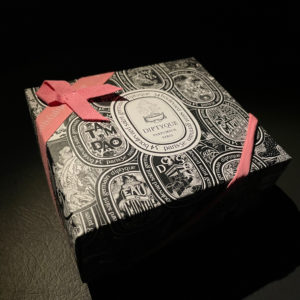 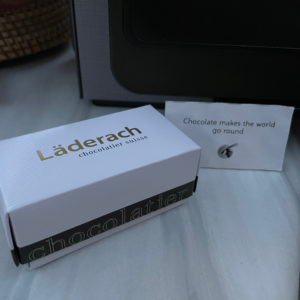