It was around 4 weeks before this flight, I saw an in-app upgrade offer from Premium Economy to First Class for $1,056 on my EZE-MIA segment. With a flight length of ~9 hours, it was over double my threshold of $50/hr to upgrade my cabin out of pocket. This was a unique opportunity as American doesn’t fly their B777-300ER on many routes and I had never flown Flagship First. On many flights from Los Angeles to Sydney, I flew Flagship Business. I decided to try it out. When I proceeded with the upgrade in the app it stated my MIA-LAX segment wouldn’t be upgraded. After paying for the upgrade to Flagship First, I noticed it upgraded me to Flagship Business on MIA-LAX. Score! Now was I was looking at 15 hours of a lie-flat seat for $1,056 which works out to $70/hr.

I boarded the evening flight to Miami from Buenos Aires and found my seat, 1A. There are 2 rows of Flagship First with a 1-2-1 layout. I noticed right away these seats aren’t as private as the Flagship Business seats, but definitely more spacious. The seat has the ability to swivel so you can face the windows while enjoying your meal. A massage feature, multiple power outlets and plenty of storage options made this seat special. 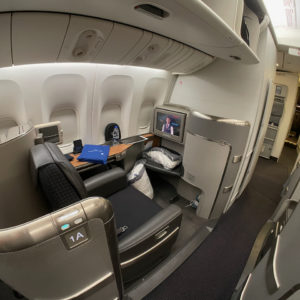 While we were taxiing for takeoff, a light went off in the cockpit which required an inspection by the maintenance crew. It was already a late night departure so a delay was not ideal for everyone onboard. Sitting in 1A, I was able to see and hear what was going on so it was entertaining. I reclined and started to watch a movie while they inspected the issue.

Movie while Maintenance fixes the issue

Refuel due to Maintenance Delay

After a 2.5 hr delay, they were able to replace the faulty part and we were on our way to Miami. I pre-ordered the Surf & Turf for dinner which was amazing compared to the terrible food on the way down to Buenos Aires. Even though it was 1AM body clock, I still enjoyed the full dinner service. The upside down plantain cake at the end dinner was a nice touch before bed. I really enjoyed the dinner. The seat reclines into a bed which is wider than the Business Class seats making it easier to get a good nights rest. The Casper bedding material made the bed soft. I was able to snag a solid 6 hours of sleep 🙂 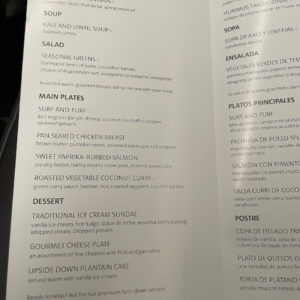 Prior to landing, I enjoyed a yogurt and fresh fruit platter which was the same I’ve had in Business Class. Great light breakfast while flying. The sunrise was gorgeous!

Unfortunately, we were diverted to MCO (Orlando) as MIA was closed due to weather (fog, zero visibility). Wow! This made this flight segment 12 hours from pushing back from the gate in EZE to landing at MCO. The waiting didn’t end after landing. All the diverted wide body planes lined up on the tarmac awaiting clearance to proceed to MIA. The ETA kept getting pushed by the FAA and we were told after 1 hr to go to a gate. We then sat on the plane while they figured out the next steps. The captain claimed we needed to refuel to proceed to MIA, but the gas truck never filled up the plane. Something was wrong and the crew kept providing misleading information. We couldn’t deplane as US Immigration didn’t open until 10:30AM local time.

Widebodies Waiting on the Tarmac @ MCO

After Immigration opened, we were deplaned as the crew timed out therefore the flight was terminated. This was 3.5 hours after landing. I proceeded to clear customs using the Global Entry machine, but since the arrival airport mismatched from my ticket I was sent to secondary screening along with everyone else using the Global Entry machines. What a mess! It didn’t end there as we then waited 2.5 hours for our checked bags. While I was waiting, I did my Global Entry interview for my renewal which was a great use of time. Now I had to lug 3 checked bags to the check-in counter which was severely overwhelmed with ~8 wide body aircrafts which diverted to MCO that morning from MIA. Police were called in to to maintain order as well as assist with loading the checked bags onto the belts. 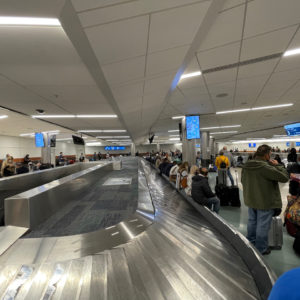 Finally 8 hours after landing @ MCO, I was able to sit down and relax in the AA Lounge to await my flight to DFW as there wasn’t anything nonstop to California with seats left. What a whirlwind! I’m never flying via MIA again if I can avoid it.

Beer after an 8 Hour Ordeal

Conclusion: Flagship First was enjoyable and definitely made the extended flight more bearable. I wouldn’t pay for Flagship First over Flagship Business and prefer the privacy of the Business pods. With the departure delay and diversion on arrival, I enjoyed 15 hours in Flagship First. I’m glad I upgraded on this flight as it was well worth it after American (via Twitter DM) offered to refund $788 for the hassle making it $268 out of pocket.