Lufthansa First Class has been on my bucket list of flight experiences since I started this blog over 4 years ago and I finally was able to try it out on a recent trip for the World Cup. Lufthansa was just named the 7th best airline in the world for 2018 by Skytrax. Booking Lufthansa First Class with United miles isn’t an easy task as they don’t release seat until at most 14 days prior to the flight. I set ExperFlyer alerts for all West Coast to Frankfurt & Munich flights, but nothing popped up. The night before my flight on LOT in Business Class, I decided to search for award availability on United’s website. I was shocked when I searched for SJC-WAW in First Class. There was a route which was from SJC to ORD then ORD to FRA and then finally FRA-WAW available in First Class! I immediately double checked the dates and times. Everything looked perfect and I called United to change my existing award ticket. The agent mentioned it would require an additional 40,000 miles one-way for a total of 110,000 United miles. I was willing to pay that premium to fly in Lufthansa First Class. It took the agent 40 minutes to book it as the taxes needed to be adjusted as well so I was anxiously waiting for the words, “Your Confirmed”.

Once I received the confirmation, I called Lufthansa for a seat assignment. I checked on ExpertFlyer and saw 1K was available. Row 1 on the Boeing 747-8i places you in front of the pilots as you are on the lower deck in the nose as they are on the upper deck. The Lufthansa agent was able to confirm 1K 🙂

Flying in Lufthansa First Class for 110,000 United miles was an excellent value compared to paying $13,077 just for the ORD-FRA flight.

After a quick flight from San Jose to Chicago, I decided to experience the new United Polaris Lounge which was just rated the best lounge in the US. It was the best United lounge I’ve been too even beating out their Hong Kong lounge. I’ll see how it compares to the Polaris Lounge here at SFO during my upcoming trip. I grabbed a light lunch as I didn’t want to be too full for the flight. After spending time in the lounge, I headed over to the gate early as I was so excited. The gate agent greeted me upon arriving to the boarding lane and replaced my boarding pass with a Lufthansa boarding pass along with a red First Class envelope to hold my “golden ticket”. I asked to board early as I wanted to grab some photos and the gate agent mentioned I could board during pre-boarding. 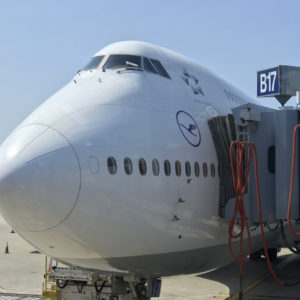 Upon boarding, I was greeted by 2 amazing flight attendants and shown to my seat. They offered to store my belongings in the locker near the galley so I didn’t have to lift them into the overhead bin. Nice touch! A glass of champagne and warm mixed nuts were served promptly. Van Laack pajamas, slippers, a Windsor amenity kit, inflight WiFi pass and food/drink menus were dropped off as I was enjoying my champagne. The inflight bar was nicely prepared which was just for the ground service as it had to be cleared for takeoff. Lufthansa ensures all the details are top notch for their First Class cabin which is as expected for a German airline. 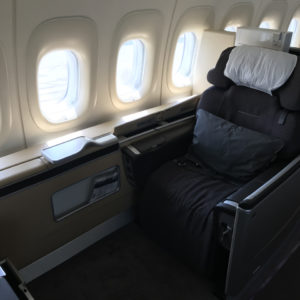 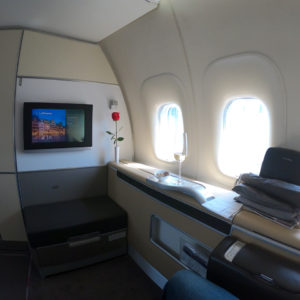 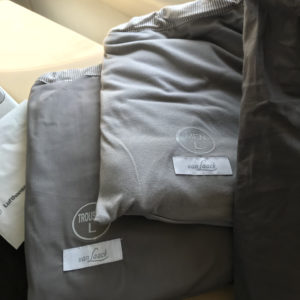 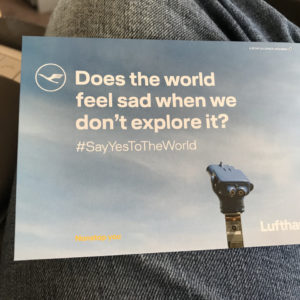 WiFi Voucher – One Time Use Code

We taxied for takeoff on a clear day in Chicago. Sitting in the nose of the plane provided amazing views. I had 4 windows for my seat which is the most I’ve had on a commercial airline in First Class. 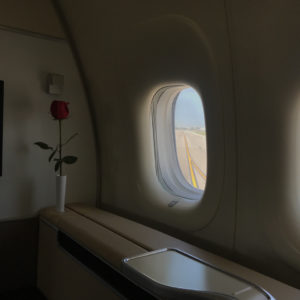 Taking off from ORD 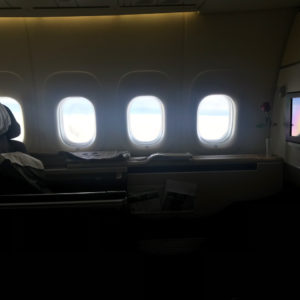 Dinner service started with an amuse bouche along with a glass of Johnnie Walker Blue. It was followed by caviar with all the traditional garnishes. Caviar service inflight is an amazing touch that you only find on top airlines in First Class. You must try it if it’s offered! The assortment of appetizers followed the caviar service which included scallops, shrimp, duck, beets and a salad. Wow, I was starting to get full. For my main course, I opted for the pan seared salmon which was cooked perfectly. Fish is always a toss up on a plane, but Lufthansa got it right. Finally for dessert, the blueberry crumble with vanilla ice cream topped off the dinner service. I was very satisfied and ready for bed. I watched live TV for about 45 minutes prior to heading to the restroom to change into my pajamas. While I was in the restroom, the flight attendant made my bed. The First Class seats aren’t very private, but they do have a divider they raise while in sleep mode. 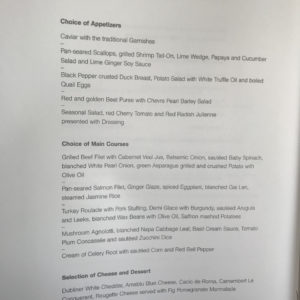 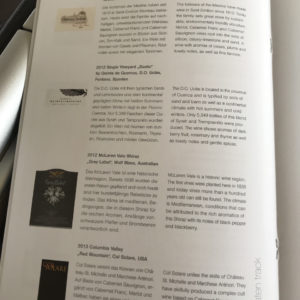 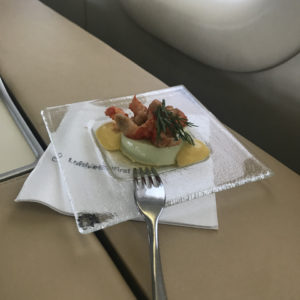 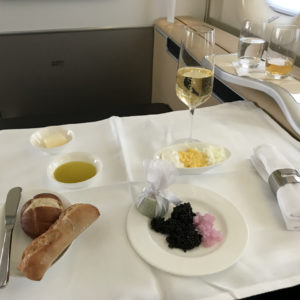 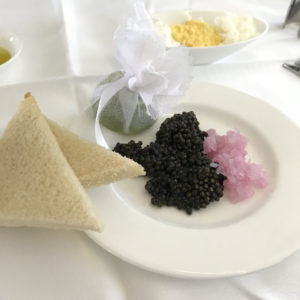 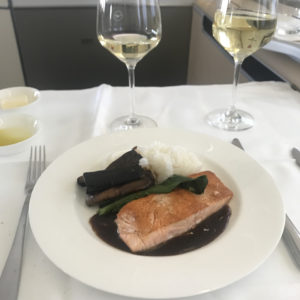 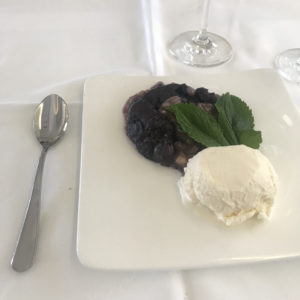 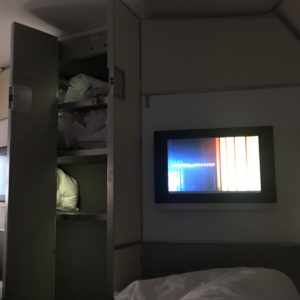 Storage in the Nose 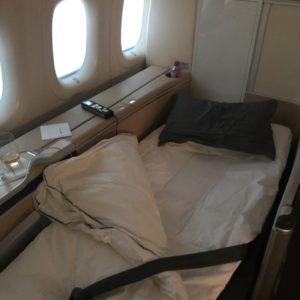 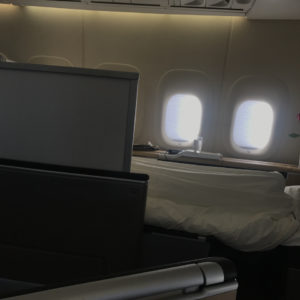 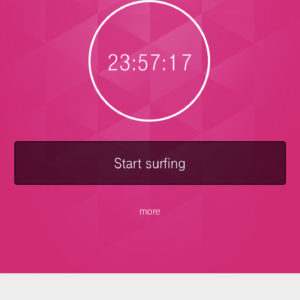 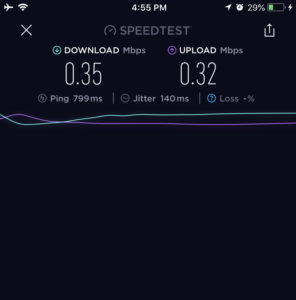 I was able to get a solid 4.5 hours of sleep on this 8 hour flight and was woken up to enjoy my breakfast just prior to landing. Given I had a large dinner, I went with a light breakfast which included yogurt, fresh fruit, a muffin, croissant and green tea. 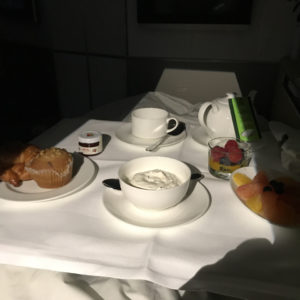 We landed into Frankfurt on time despite departing Chicago a few minutes behind schedule. I was somewhat refreshed and ready to grab a bath at the famous Lufthansa First Class Terminal @ FRA. I’ll cover the First Class Terminal as well as the Porsche Experience in future posts. Lufthansa knows how to treat their elite customers! 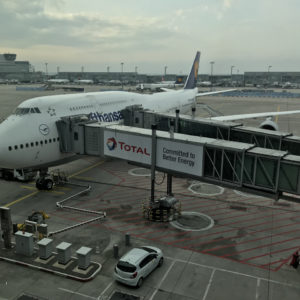 Conclusion: Lufthansa First Class lives up to the hype by other flyers and I would love to fly them again! The seats aren’t as private as the Singapore Suites or Etihad Apartments, but the service on Lufthansa is top notch to make up for it. The ground services and First Class Terminal @ FRA make it worth every penny (paid ticket) or every mile (award ticket) spent.