Tesloop: LAX to SAN in a Tesla X

I was able to snag 30% off the ride using a coupon code, Harrison30, so I was able to book a seat for my large luggage and I for only $61.60. If you travel with just a carryon you’ll be fine with just booking your seat, but if you have a large suitcase you have to book 1 of the rear seats for your luggage. The route I booked was from LAX (Los Angeles Airport) to a Starbucks in North County San Diego.

After arriving via a Lyft to LAX, I awaited the Tesloop to pick me up at Arrivals in Terminal 2 near the large white pillar labeled Terminal 2H outside of Starbucks near baggage claim. Tesloop was in contact with me via text messages to make sure I was on time and provided an ETA of my pilot (driver), Daniel. Daniel pulled up on time in the black Tesla X and I loaded my luggage into the SUV. I hopped in and we waited for other passengers to join. Only 2 other passengers so it wasn’t a full Tesloop. We were on our way in no time. It was the 2nd time ever riding in a Tesla X so it was still a new and exciting experience. While on the city roads they drive the Tesla just like a normal car, but on the highways they use Autopilot which surprisingly worked very well. 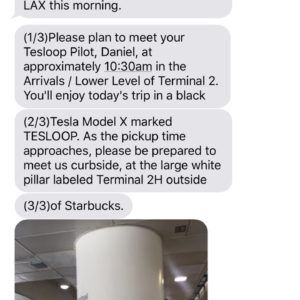 Tesloop offers free snacks, drinks and WiFi during your ride. I was seated in the 2nd row which is the best seat if you want a snack or drink. The cooler sits in between the 2 seats. I was able to grab an Icelandic Water, Taste Nirvana Coconut Water and a Hint Fizz Water during my ~2hr ride. The selection reminded me of all the startup snacks and drinks many Silicon Valley companies stock in their kitchens. The WiFi was powered by Verizon, but for some reason the data speeds were extremely slow. I’m not sure why as I have the same hardware and haven’t experienced such slow speeds anywhere. I would just bring your own hotspot (MiFi) if you need a reliable connection. 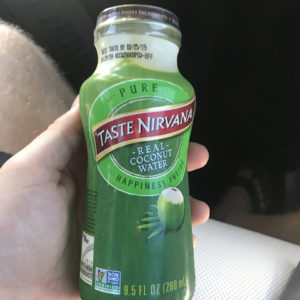 We arrived at the Starbucks parking lot in North County San Diego on time and it was a short drive to get to my final location. The ride was super smooth and quiet.

Overall: An excellent service/value for reliable and fun transportation! I don’t believe Tesloop can be profitable at their current rates, but it’s a great idea and putting the Tesla’s to a test given the high usage. In the meantime, try it out while it’s still around and cheap! I wouldn’t hesitate to book it 🙂