I was headed to Iceland via Seattle last month, but when weather disrupted my flights it caused a mess to rebook on an alternate route. The originally scheduled Alaska Airlines flight was to depart SJC at 12:15PM, but due to snow in Seattle it caused the plane to be delayed as all planes needed to be de-iced. The flight to SEA finally departed at 4:50PM which wouldn’t work for our connecting flight to Iceland on Icelandair. I immediately started to search for alternate routes using the Kayak app. The only route which would arrive the same day as originally planned was via London on British Airways. The gate agent who was helping with rebooking my flight was able to lock it in although it took a solid 75 minutes. It required the ticket to be “FIM’d” which allows the revenue that Alaska was going to receive to be sent to British Airways. Luckily, I had access to The Club @ SJC lounge access during this ordeal. 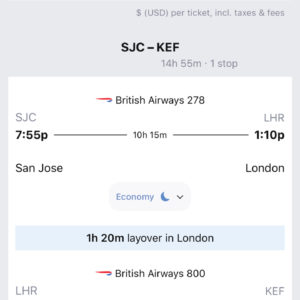 I then had to go to baggage claim to retrieve my checked bag and check it in with British Airways. Upon checkin, I tried to get an aisle seat in a “blocked off” row. The agent mentioned the row must be broken and not bookable which was a lie. I was assigned a middle seat as that’s all they had left. I then proceeded back to the lounge to grab a shower. The flight was scheduled to takeoff at 7:55PM so I was at SJC airport the entire day. Prior to boarding, I asked the gate agent if the blocked row was available and I was told no. As I was in line getting ready to board, I overheard a lady was just assigned 37H which was the aisle seat in the blocked row. I checked the seat map using the Seat Alerts app powered by ExpertFlyer and saw she was indeed assigned the seat. The gate agent mentioned the system magically opened it up and she luck out. I asked for the window seat, 37K, and was finally assigned it. The middle seat remained blocked and it was never occupied so it all worked out. The gate agent did ask where I was getting the seat map information as he said I knew too much to be wrong. As I boarded, I mentioned to him to check out Seat Alerts and to not lie to future passengers. British Airways needs to step it up in today’s high tech world! 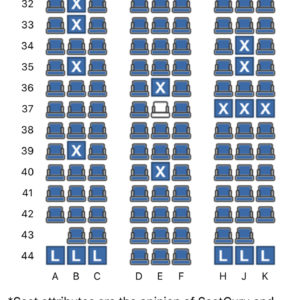 Oneworld Emerald status from my AA ExecPlatinum status paid off as I boarded with Business Class so I could get settled in at my seat. The seat and legroom was spacious. After changing into my Cathay Pacific PJ’s, I was ready for the long haul to London. Dinner was served after takeoff, but I slept right through it and was able to get 7 hours of sleep. It really helped not having the middle seat occupied as I flipped up the armrest to gain a few more inches of width to my seat. Flying past Iceland seemed like a waste of time as I would have to take another 3 hour flight back to Reykjavík, but it was the only option. Upon landing into London, I had about 20 minutes to grab a quick bite to eat at the British Airways Galleries First Lounge in Terminal 5 South. It’s an amazing lounge and wish I had more time to enjoy it. 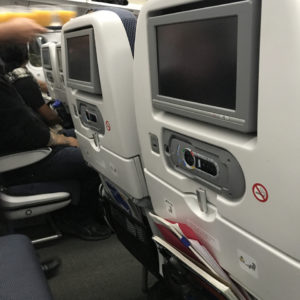 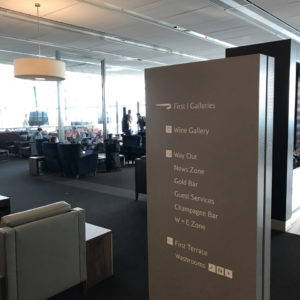 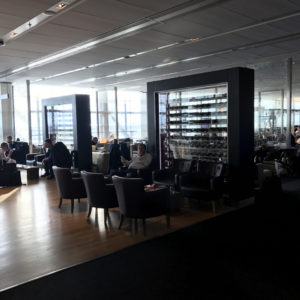 Conclusion: I finally arrived into Reykjavík around 12 hours late, but I didn’t lose an entire day given most flights only operate once daily. Flying on the new B787-9 was a nice ride in Coach although they don’t offer inflight WiFi. Given the poor handling of the seat assignments by the British Airways agent I wouldn’t recommend flying them. I had a poor experience with BA last year with the gate agent forcing me to checkin my carryon bag to speed up the boarding process even though there was still plenty of overhead bin space. I refused and he eventually let me on without checking it in. I don’t think things will improve given these 2 experiences.