Getting to Kruger National Park isn’t easy and you have to first get to JNB (Johannesburg) which took ~30 hours of flying from SFO via HKG. With limited airline options in South Africa, you are forced to go with some expensive options compared to other countries in the world. We purchased seats on South African Airlink for ~USD 135 one-way from JNB to HDS. Using miles for Airlink flights within South Africa isn’t worth it as you must use South African Airlines miles and the rates are terrible. Hoedspruit Airport (HDS) is an Air Force Base which is also used now for commercial flights serving as a gateway to Kruger National Park.

Our flight departed from a remote stand in JNB which required boarding a bus to get to the plane. We were flying an Embraer 190 jet which had a seating layout of 2-2. The plane was fairly new and the overhead bins fit full-size carryons as long as it wasn’t bulging which was a nice feature for a small jet. Most smaller planes you have to gate check full-size carryons. A quick taxi to the runway and we were off to HDS. The flight was only 1 hour, but they still served a snack and drinks. Great service for a short flight! We landed into Hoedspruit and taxied pass some military bunkers on our way to the “terminal”. The terminal was a small building with some fencing around it. Very limited services are available at the airport. We rented a car with Avis which went very smoothly. Off to Blyde Canyon we went! 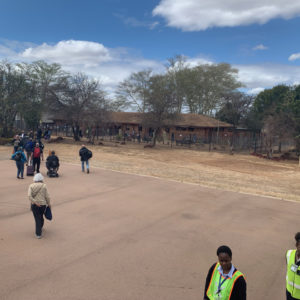 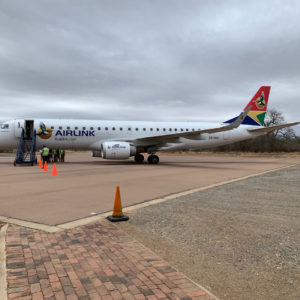 Conclusion: Airlink is an excellent airline when flying their reliable jet service. Avoid their DH8 turboprop as our return flight was cancelled due to mechanical issues and we were forced to stay overnight until they could get us a jet.