I covered Cathay’s Premium Economy product in this previous post, but this one will focus on flying Premium Economy on the B777-300ER. The seats are similar yet the layout is different. After grabbing dinner in The Pier and a shower in a cabana in The Wing, I proceeded to the gate for my delayed flight to SFO from HKG.

I was seated at 32K which is the best bulkhead window seat and features a leg rest. Bulkhead seats only have a leg rest which is a bit too short unless you are under 5′ 6″ so bring a large pillow you can place it over the metal piece to make it even comfier. The seat reminds me of an angled lie flat Business Class seat which makes this an excellent alternative to the expensive Business Class. 32K is very private and you don’t get the traffic that Row 30 gets due to the bathroom only being available on the H/K side of the plane. You don’t get the bathroom smell as the door opens towards the front of the plane. 32K is reserved for Oneworld Emerald members to book prior to the flight. I’ve adjusted my flights based on the availability of 32K as it’s the prime seat. 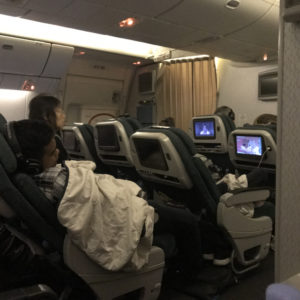 We were served dinner after takeoff even though the flight departed after 1AM. I opted for the Slow cooked beef tenderloin which was a nice meal and even included red wine jus. I didn’t eat much as I wanted to sleep as much as I could due to the flight time. Sleeping in these Premium Economy seats was comfy and I was able to get 6 hours of sleep. The recline is 8 inches which makes it easier to sleep. Prior to landing into SFO, we were offered breakfast and I opted for the eggs and sausage. The food on long haul flights is different between Premium Economy and Economy as the lids are labeled PEY. The food was tasty and I was ready for a full day in SFO. 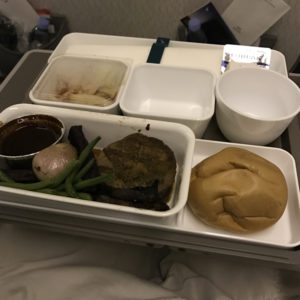 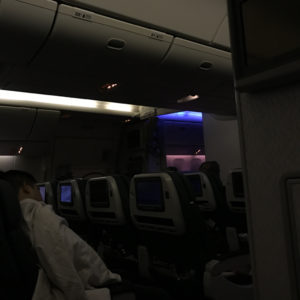 Mood Lighting only in Biz Class

I highly recommend flying Cathay Pacific Premium Economy on your next transpacific flight! You’ll enjoy it 🙂