72 Hours in the Life of Palo: San Francisco to Sydney

Ever wonder what it takes to travel from San Francisco to Sydney? It might seem all of my travels are fun and easy, but that’s not always the case. Check out the 72 hour adventure!

Monday 10AM (T-36 before LAX-SYD AA73): I received a notification from ExpertFlyer stating there is upgrade space (C Class) to Business Class. In order to ensure my gifted SWU clears, I called American’s Platinum Desk (I wasn’t Executive Platinum yet) to manually push it through. Once it cleared, I logged onto aa.com and selected my seat as well as preordered my meal.

Monday 8PM (T-26): I made sure all my electronics were fully charged and finished last minute packing. The packing checklist I printed off and checked off the items as they were packed. I can’t forget my cycling shoes for the stationary bike at Sheraton on the Park, Sydney.

Tuesday 8AM (T-14): My bags were ready to go and I had my passport in my pocket. I shutdown my iMac and unplugged it from the wall. The water heater temperature was also lowered as there is no need to keep the water hot while I’m away.

Tuesday 4PM (T-6): I called for an UberX to SFO for my flight down to LAX.

Tuesday 5PM (T-5): I checked in using the Priority line at the American Airlines counter at SFO Terminal 2 and received my boarding passes all the way to Sydney. My bags were tagged with Priority tags to ensure they are with the first ones off in Sydney.

Tuesday 5:15PM (T-4.75): Prior to heading to the gate, I walked over to Terminal 3 to access the AMEX Centurion Lounge to grab dinner and a drink to kickoff the trip. To expedite passage through security I used the TSA PreCheck lane, thanks to Global Entry. I had to clear security twice as SFO doesn’t have a post security terminal connector for T2-T3.

Tuesday 5:20PM (T-4.66): I entered the AMEX lounge and tried to find a table. It’s extremely crowded, but hopefully the recently announced changes to reduce the number of guests will improve it. The food and drinks are worth the walk from Terminal 2!

Tuesday 5:45PM (T-4.25): Headed back over to Terminal 2 and went through security again to board my flight to LAX.

Tuesday 7:30PM (T-2.5): Arrived LAX Terminal 4 and walked over to TBIT (Tom Bradley International Terminal) for the Oneworld Business Class Lounge. I headed to the left after entering the lounge in order to grab a reclining chair with a foot rest. The juicing machine is the best part of this lounge so I made a carrot & apple juice to end the night before the long haul to Sydney. While relaxing in the lounge, I sent an iMessage to my driver in Sydney reminding him of the pickup and I’ll notify him via inflight WiFi about the flight status.

Tuesday 9PM (T-1): I walked back over to Terminal 4, Gate 41 to board my fight to Sydney onboard American’s B777-300ER. I settled into seat 4A which is in the quiet mini cabin of Business Class. 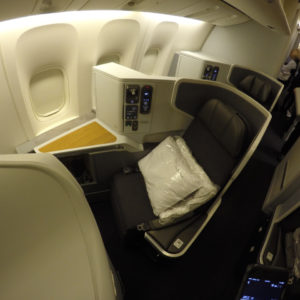 Wednesday 1PM PST (T+13): Breakfast was served prior to landing into Sydney after I slept for around 8hrs. I sent another iMessage to my driver stating our arrival time via the inflight WiFi.

Wednesday 3PM PST (T+15): Landed in SYD! Being seated in 4A, I was the first passenger off the plane. I proceeded to the ePassport machine to get my automated gate ticket. After clearing the automated gate, I awaited my bags at baggage claim. Once I collected my checked bags, I proceeded through customs to meet my driver who was waiting for me in the arrivals hall.

Wednesday 4PM PST (T+16): I arrived at the hotel and greeted by familiar faces after staying over 50 nights at this hotel. The upgraded Executive Suite wasn’t ready for checkin, but I was given a key to the gym to go and shower. A shower is a must after a long flight! My bags were stored at the front desk and will later be placed into my room when it’s ready.

Wednesday 5PM PST (T+17): Grabbed an UberX and headed into the office for work.

Wednesday 11PM PST (T+23): Grabbed an UberX and headed to the hotel to relax in the Club Lounge. The food and drinks served in the lounge are sufficient for a light dinner. I love the views and balconies from this top floor lounge so I always grab something every night during my stay.

Thursday 3AM PST (T+27): Bedtime as I struggled to keep my eyes open while watching TV.

Conclusion: Travel can be fun but exhausting at times! Don’t forget to rest in between trips. I’m ready for my next monthly trip! 🙂