Singapore Airlines is one of the first airlines to fly the new Airbus A350 which is to compete with the Boeing 787 (Dreamliner). Qatar Airways was the launch customer last year with service from Doha and now 9 airlines (Qatar Airways, Vietnam Airlines, Finnair, LATAM Brasil, Singapore Airlines, Cathay Pacific, Ethiopian Airlines & Thai Airways) operate the A350. I had to opportunity to fly the new A350-900 in Business Class from Singapore to Düsseldorf, Germany. When I saw availability for this new route (started July 2016) using miles back in January 2016 I booked it immediately. It cost me 68,000 miles and IDR 3,260,500 (~USD 250) in taxes to fly from Jakarta to Düsseldorf via Singapore in Business Class. Both Citi and Chase points transfer to Singapore Airlines making this an excellent use of those points especially for those who obtained the Chase Sapphire Reserve recently.

Singapore Airlines was so excited to fly this new Airbus, they created their own website dedicated to the A350 here.

SQ338 departed from Singapore at 11:30PM local time so it was a perfect flight to have a lie flat bed. I was relaxing in the Singapore Airlines SilverKris Business Class lounge and about 2 hours prior to my flight I grabbed a shower to get ready for the long haul to Germany. Departing at night and arriving early in the morning (6AM) made it very difficult for me to capture pictures of the exterior of the plane but I was able to get some awesome shots inside. Upon boarding, I found my seat at 14A which was the first row where the curvature of the A350 was straight allowing for the maximum amount of space along the window. The 2 rows of Business Class which I believe are the best are Rows 14 & 15 due to the reduced foot traffic and openness of cabin (fuselage is maximum diameter). They decided not to install overhead bins above the center seats making the ceilings seem much higher. Accent LED lighting throughout the cabin was a nice touch as you could tell you were on a new plane. 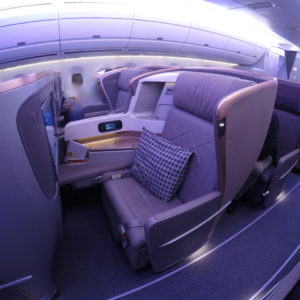 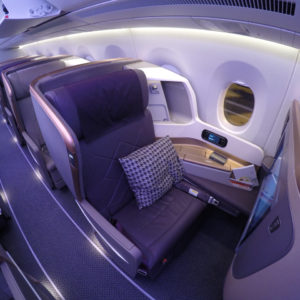 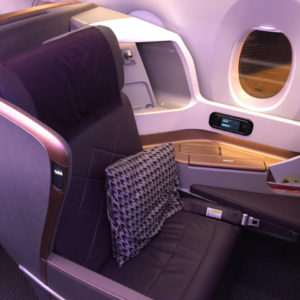 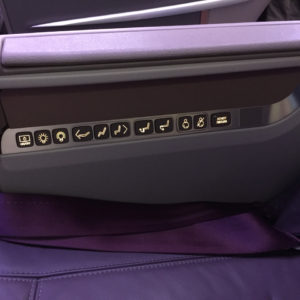 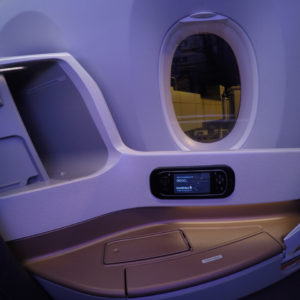 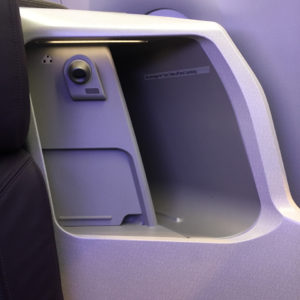 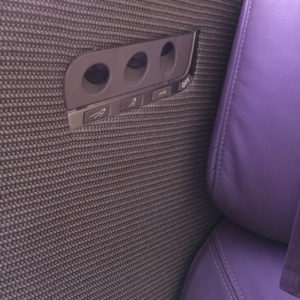 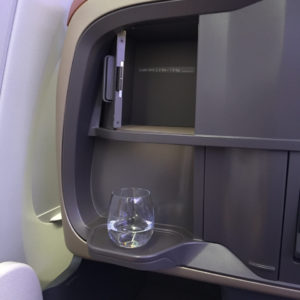 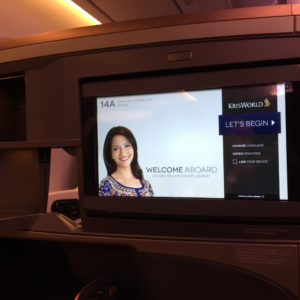 Even a mirror to the left of the TV 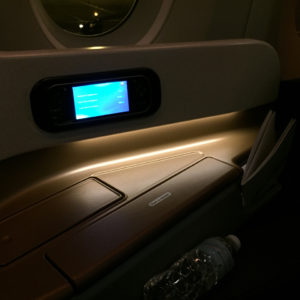 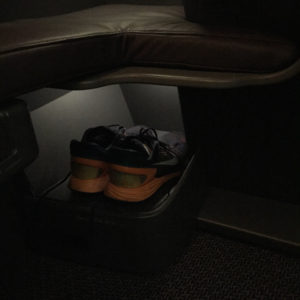 We departed Singapore on time and after takeoff we were served dinner. It reminded me of my flights from LAX to SYD which has the same meal schedule. I had to stay up as I used the Book the Cook option and selected Lobster which was the same meal as I had in Suites Class earlier this year. The starter was a seafood salad which was very tasty and a great way to start in preparation for my lobster thermidor. I can never pass up lobster and especially when they know how to cook it well. I finished dinner with a Belgian chocolate mousse cake. Singapore Airlines doesn’t offer pajamas in Business Class, only in First Class so make sure you bring some for a long haul flight (mine were in my checked bag… fail). While I brushed my teeth my flight attendant prepared my bed and I was ready for a great nights sleep. She asked when I’d like to be woken up and I requested 2 hrs prior to landing. The A350 is a super quiet plane and I think it’s quieter than the B787. The cabin temperature was perfect as it was cold throughout the duration of the flight. I’d much rather have it cold than hot. You can always use the blanket they provide to stay warm. 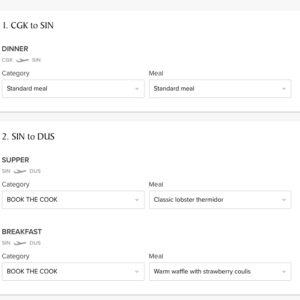 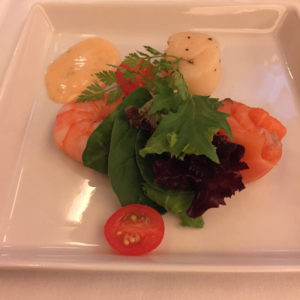 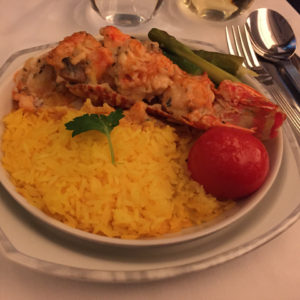 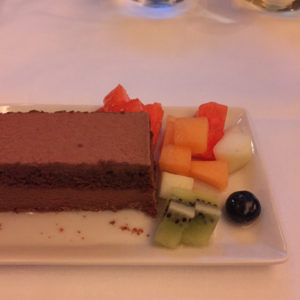 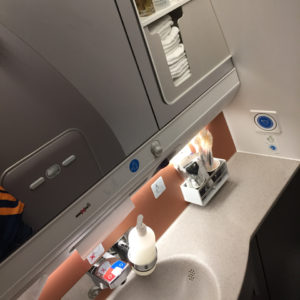 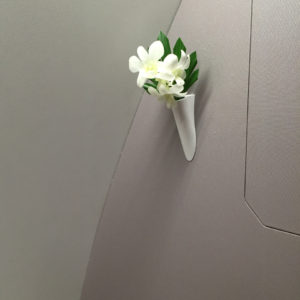 I woke up around 2.5hrs prior to landing which gave me a solid 8 hours of sleep. The bed was comfy although a bit tighter than the reverse herringbone seats on other planes since reverse herringbone seats already have the seat angled to lineup with your footrest whereas the A350 seats have the seats positioned straight forward and the footrest is angled to the side. I can’t complain as getting 8 hours of sleep on a plane is amazing! With a few hours to go I decided to test out the new high tech items onboard. The HDMI port is most likely never used on these planes but after my Etihad First Apartment flight I decided to always carry a HDMI cable just in case. This time I had a cable with me to test it out. It mirrors your laptop on the TV which after testing is great for videos and pictures but text is very hard to read even though it’s displaying in HD at 1080P. Note, the screen is not touchscreen so you are required to use the touchscreen remote which can be a hassle if you want to just change something quickly. The satellite WiFi on this flight was $21.95 for unlimited use and the speeds were very fast as it was provided by T-Mobile. If you see the new KrisWorld WiFi network on your flight instead of OnAir then you know the WiFi will be fast. I’ve updated my 2016 inflight WiFi comparison to reflect this new offering by Singapore Airlines. 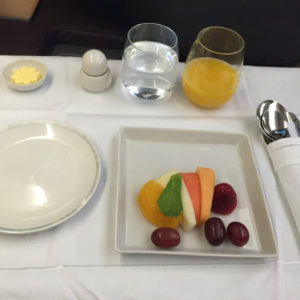 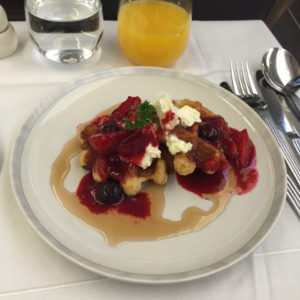 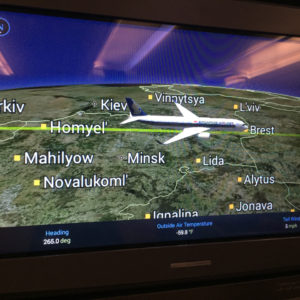 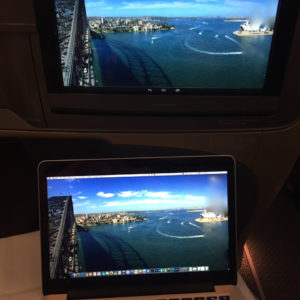 HDMI from Laptop to TV 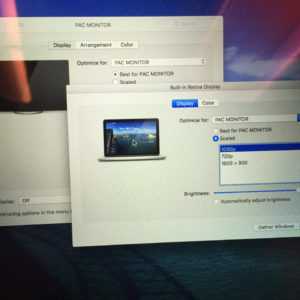 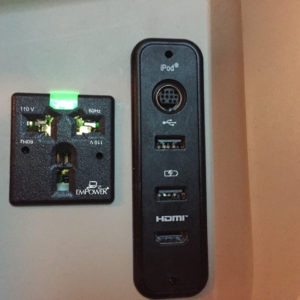 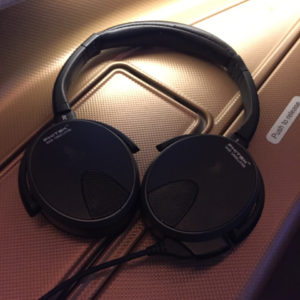 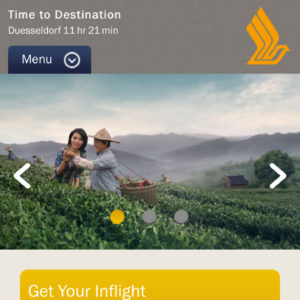 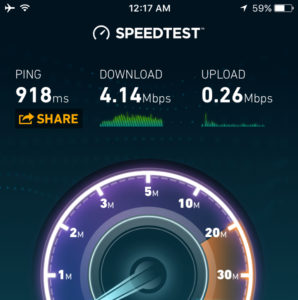 Breakfast was served about 1.5hrs prior to landing which started with a fresh fruit salad and freshly squeezed orange juice. For the main course, I had selected the Belgian Waffles with Strawberry Coulis via Book the Cook option. They also offered this dish as an option on the main menu. They were hot & delicious but a bit sweet. We landed in Düsseldorf earlier than scheduled so our gate wasn’t available when we landed but I didn’t mind hanging out in my seat for 30 minutes until the plane moved from our gate. Another excellent flight with Singapore Airlines although I’d rate the crew only a B rating compared to my other SQ flights. It could have been due to this being a non-premium route. Either way I’ll take Singapore Airlines over most airlines any day. 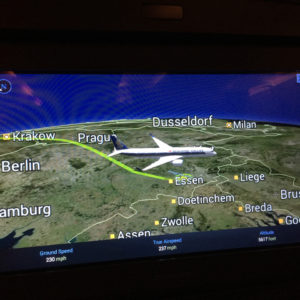 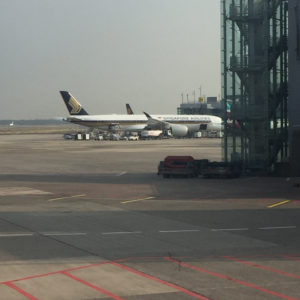 SQ A350 from my connecting flight on Air Berlin

Overall: The A350 is an amazing new plane if you are flying in Business Class and Singapore Airlines hospitality is top notch. With all the latest features on this plane you can’t go wrong with flying it. If you get an opportunity you should definitely try it. They start flying the A350 on their new nonstop service between SFO and Singapore starting October 23rd.