This was our final long haul flight on the way home from our journey to Africa last year which I booked on miles/points. I was only able to secure 2 First Class seats (3A & 4A) at the time of booking which can be very challenging with Etihad, but you have a better chance on AUH departure flights.

We arrived to AUH at 1AM from the Seychelles and had a 9.5.hr layover prior to our flight to JFK. Landing in the middle of the night is common for flights in the Middle East so we decided to leave the airport for a bit. There isn’t anything really open, but we grabbed an Uber to visit the Sheikh Zayed Grand Mosque. Upon arrival, I was shocked by the architecture and it was illuminated in different colors making it a great photo. Security was posted around the perimeter of the building so you can’t get close, but it was nice to take it all in from a distance. We returned to the airport, but had to wait a bit as we couldn’t check-in until 8 hrs prior to the the flight. 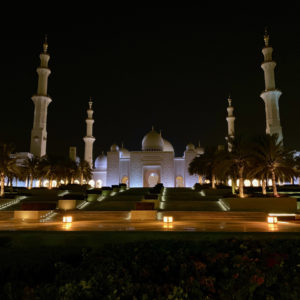 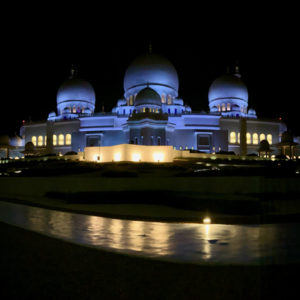 After checking in, we proceeded to Etihad’s Flagship First Class Lounge & Spa. Wow! This lounge was massive and empty as it was 2:30AM. There were maybe 5 other guests in the lounge. The lounge agents greeted us and explained all of the features of the lounge which included a Relaxation Room, Spa, Gym, A La Carte Dining and multiple bars. We decided to grab a bite to eat and drink prior to getting some sleep. We had a choice of whatever table we’d like. I ended up ordering the Arabic mezze platter and a steak paired with a Bordeaux blend red wine. It was restaurant-quality food and I highly recommend the steak. 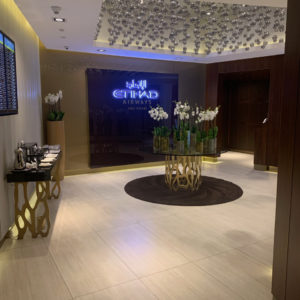 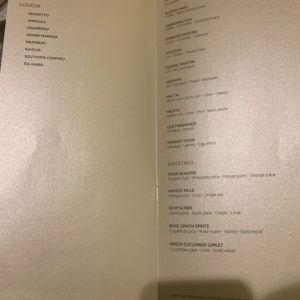 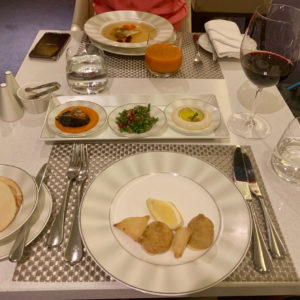 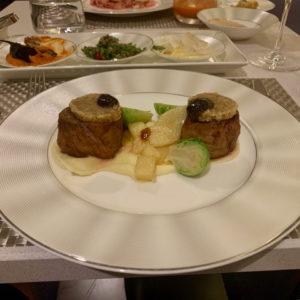 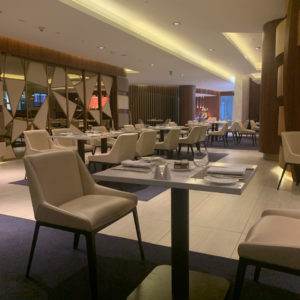 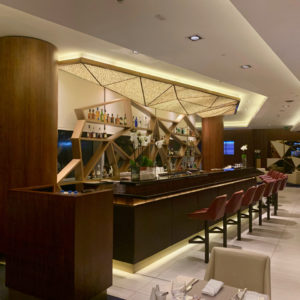 We headed to the Relaxation Room to get some sleep before our massage appointments. The room had some very nice recliner seats and animations on the screen to put you to relax your mind. Pillows and blankets were available from the lounge attendants. I was able to get a solid 2 hour nap and felt refreshed. I headed to the gym for a quick workout session prior to my massage at 5:30AM. The gym included treadmills, bikes, elliptical machines and some yoga mats with free weights. Very impressive for an airport lounge gym. 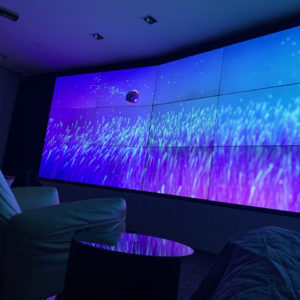 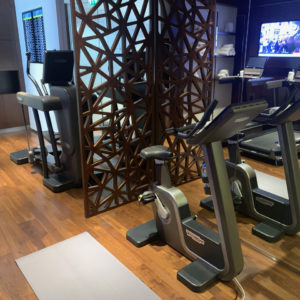 The spa opens at 5:30AM and we were first on the waitlist so we were able to get a complementary 15 minute back massage. A nice touch to top off this amazing lounge experience. After a quick shower after the massage, we decided to grab breakfast before proceeding to board the flight. There was a breakfast buffet as well as a la carte items you could order from the menu. I ordered poached pear waffles with fruit as well as scrambled eggs. They were both delicious, but I didn’t want to be too full for the flight so I only finished half. 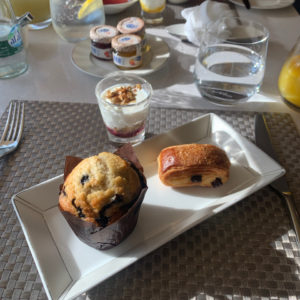 US Immigration is performed at a pre-clearance station in Abu Dhabi therefore when landing into JFK, we would deplane just as a domestic flight would in the US. We departed the lounge around 1.5hrs prior to the flight to go through immigration. Global Entry kiosks were available so we proceeded to use them. After walking up to the officer to show him the receipt, I was stopped. This was very odd and had never happened before with Global Entry. Unfortunately, all crew and Global Entry passengers with checked luggage were all subject to secondary screening. 🙁 I was escorted into a secured room and told to sit there until my name was called. I sat there patiently for over 45 minutes waiting for my name to be called. There were no windows in the secured room. Nobody really knew why they were selected. The flight crew inside the room assured me that the plane wasn’t leaving as they need to still do preflight checks. I was finally called and my checked luggage was pulled from the cart for extra screening/questioning. The CBP officer finally cleared me and I was able to exit to the boarding gate. 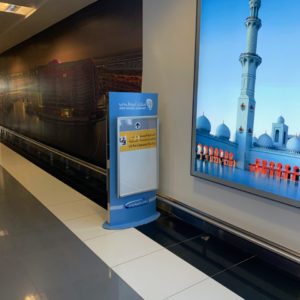 There was another Etihad lounge at the boarding gate, but it was very crowded and we were only there for 10 minutes prior to boarding our flight to New York.

I was ready for my 3rd Etihad Apartment flight which all of them have been on different routes (JFK, LHR, SYD). Upon boarding the Upper Deck of the A380, we were escorted to our Apartments. Apartments 3A & 4A have a partition which can be lowered to create a “2 Bedroom Apartment” although it’s only easy to chat if you are both on the bed. At 39 square feet each, the Apartments are very spacious and feature a 24″ TV. The flight crew taking care of us on our flight to JFK was Santiago (F&B from Ecuador), Gregory (Chef) and Holly (Purser). They were fun and wanted us to enjoy ourselves. Champagne and warms dates were served along with a hot towel and free inflight WiFi card after getting situated at our seat. We took off just a bit after schedule due to the US customs delays, but it was a smooth takeoff over the Arabian desert. 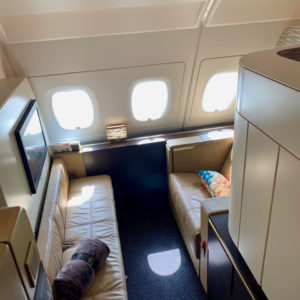 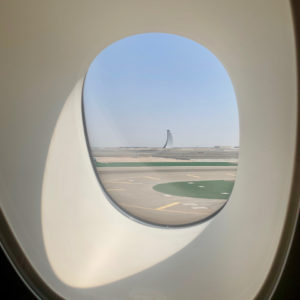 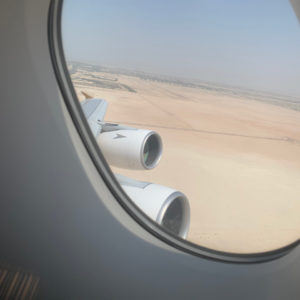 After a long night without much sleep, we decided to get some rest and enjoy dinner later in the flight. The crew served a mint mojito with some snacks to enjoy while I watched some TV’s and caught up on sleep. The futon-style couch folds down into a bed which makes the Apartment an amazing oasis if you’d like to get some sleep. It’s not as soft as Cathay Pacific First Class, but the size of the bed is amazing! If you get thirsty there is a drink cooler in the Apartment 🙂 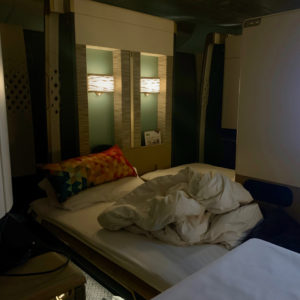 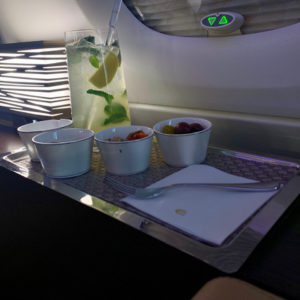 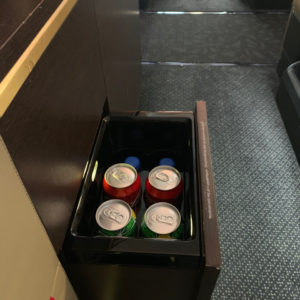 I was able to get a solid 4 hours of sleep before waking up hungry and ready for “dinner”. My body clock and sleep schedule were all screwed up, but I was hungry. I started it off with their Signature Caviar Service which was Russian Caviar from Gourmet House Dubai along with all the fixings. For my appetizer, I opted for the venison loin which was delicious and cooked to perfection. You really appreciate a chef being onboard to prepare your meals. My main course was a black cod seasoned just with some sea salt and served with some vegetables. Very simple, but again cooked perfectly which can be hard for fish. I was so full by this time, but Gregory insisted I try the Arabic honey cake for dessert. It was super light and fluffy, but sweet. Washing away the sweetness, I finished dinner with a glass of Remy Martin Cellar Selection No 28 Cognac. 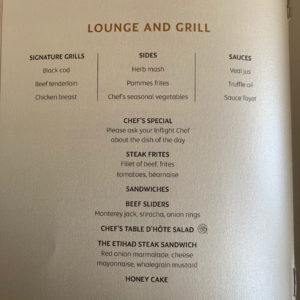 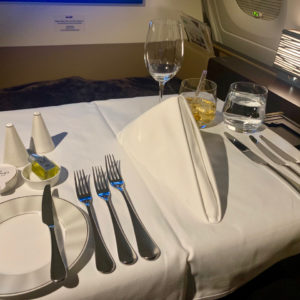 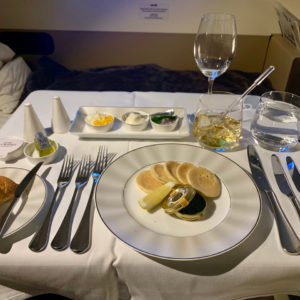 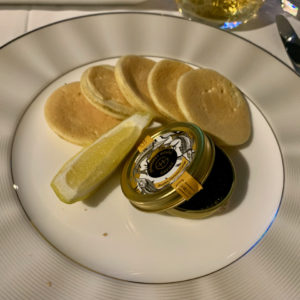 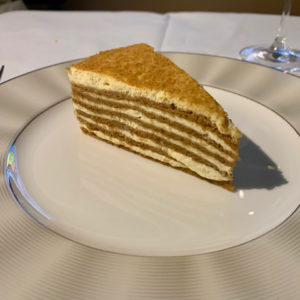 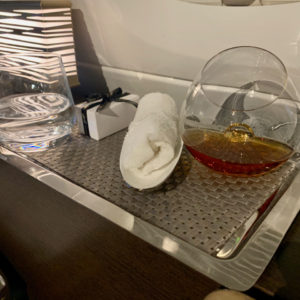 I spent the next few hours watching live satellite TV and catching up on emails using their inflight WiFi service. Each Apartment guest is given a voucher for complementary WiFi (Flex Plan – 150MB) which is a new offering since my past 2 flights. The inflight WiFi isn’t the fastest, but plenty to catch up on emails and iMessage. 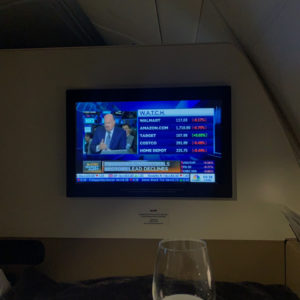 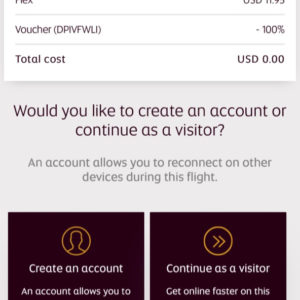 Around 3 hours prior to landing, I had booked the shower to freshen up before a night out in New York City. The shower is limited to 5 minutes of water per passenger, but plenty to get a nice rinse. Acqua Di Parma bath products are provided in the shower as well as an amenity kit. I don’t need a blow dryer, but there is one available to get your hair looking nice. The novelty of showering inflight never wears off! You feel amazing walking back to your Apartment. 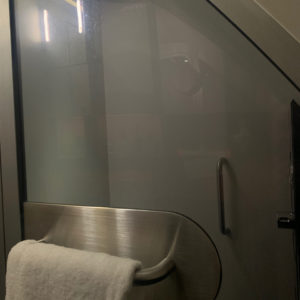 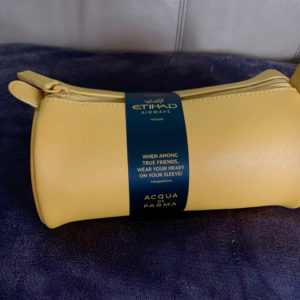 Instead of scrambling for food after landing, I decided to have a quick bite just before landing. I went with the steak frites which include a filet, fries, tomatoes, roaster garlic and béarnaise sauce. Great way to end an amazing 14 hour flight from Abu Dhabi to New York which was similar length to the Sydney flight. We landed into JFK just a few minutes behind schedule. There were two other A380’s nearby our gate while we were taxiing which I’ve flown on previously (Emirates & Singapore). We proceeded off the flight just like a domestic flight due to pre-clearance which was an awesome touch, the last thing you want to do upon landing is to wait in line at Customs. 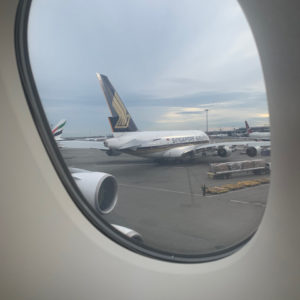 Conclusion: Etihad Apartment Class hasn’t disappointed me after flying it 3 times now. I’d highly recommend flying them as long as the A380’s fly again soon! COVID-19 has had a major impact to the aviation industry. Most if not all A380’s are parked at the moment. The quality of service, attention to detail, onboard shower and super spacious Apartment seats makes Etihad still rank in my Top 5 global airlines.