After an amazing trip flying Etihad’s Apartment Class in 2016, I was ready to fly it again yet this time from London to Abu Dhabi which is about half the flight time than Abu Dhabi to Sydney. I searched for Etihad award ticket availability using ExpertFlyer and locked in a ticket using American Airlines miles which cost 62,500 miles plus $247 in taxes for a one-way ticket LHR-AUH-MLE. The 2nd leg of the trip was in Business Class. This ticket retails for $4,447 therefore giving me an excellent value of $0.067 per mile. 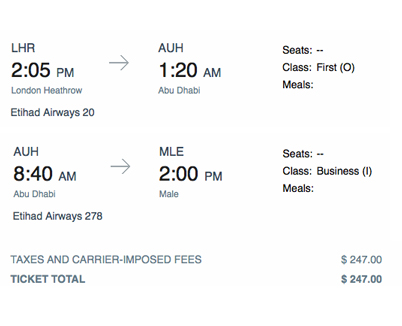 I arrived with my friends to LHR via the Heathrow Express after a quick night at the London Marriott Hotel Park Lane. We checked in at the First Class checkin counter with Etihad. All seemed to be going fine with tagging our bags all the way to Male, Maldives until the agent mentioned we had an issue. My friend, Hans, didn’t have a valid passport for entry into the Maldives. Maldives entry requirements for US citizens requires the passport to be valid for a minimum of 6 months from the arrival date. His passport was only valid for 5.5 months. Lesson learned, if you have 1 year of validity remaining on your passport just renew it! I was able to get a same day appointment for him at the US Embassy (located 1 block from the hotel we stayed in the night prior) and rebooked on the evening flight to Abu Dhabi in Business Class. An invalid passport caused him to miss out on the Apartment Class. Always check the entry requirements prior to your international travels. We tried to get him to Abu Dhabi and then have him handle the passport renewal in Abu Dhabi, but Abu Dhabi also has a 6 month requirement whereas Dubai has a 3 month requirement even though they are both located in the UAE. We’ll just have to travel again to get some professional photos of the Apartment Class although I now have some professional photos of Business Class which I’ll have a guest blog post from him regarding his experience.

After sorting through the rebooking, I proceeded to the Etihad Lounge to grab some lunch prior to boarding. The lounge agent welcomed me and mentioned she was awaiting my arrival. Boarding was to begin shortly, but she mentioned I could be the last to board which was around 20 minutes prior to the departure time. This gave me plenty of time to order some food and drinks. I enjoyed some chicken satay and falafel which were both cooked perfectly. The bar didn’t have rye so I settled for a Glenlivet 18 Year. 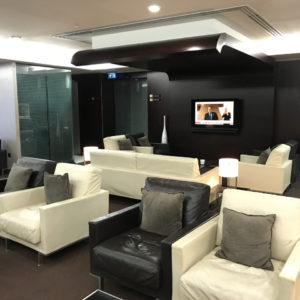 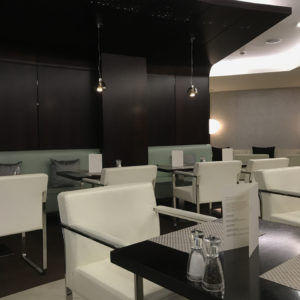 I boarded through the upper level jet bridge and was shown to my Apartment, 3A. There are 9 in total, configured 1-1 across a single aisle, and take up a total area of 39 square feet. It features a 30.3 inch wide reclining chair, a full length ottoman which can be transformed into a bed, a 24-inch TV monitor which can swing to align itself to the ottoman so that it can be viewed from the bed, a vanity cabinet and a chilled drinks bar with assorted drinks. Only 4 of the 9 Apartments were occupied for this flight which made the service impeccible. Doriana, our flight attendant and Nikkole, our chef from Manila welcomed me onboard and wished me a pleasant journey. They were excited to welcome me back to Apartment Class. Shortly after getting situated, I was brought a hot towel, dates and champagne. I was seated in a rear facing seat to give me a new perspective after sitting in 4A on my last flight. Nikkole took my food and drink order prior to takeoff and would start my meal service around 2 hours after takeoff as I had just grabbed a snack in the lounge. 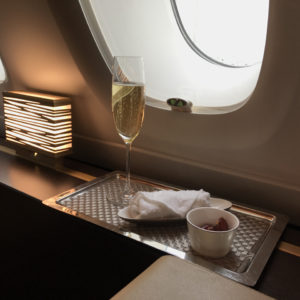 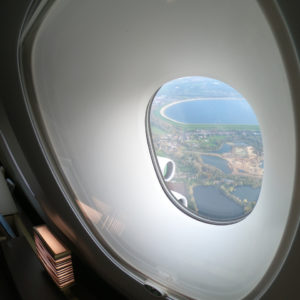 Taking off from LHR 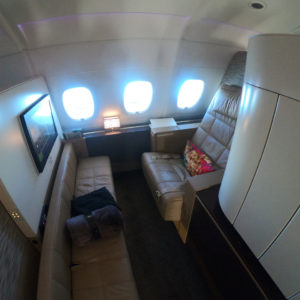 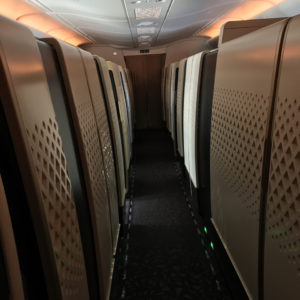 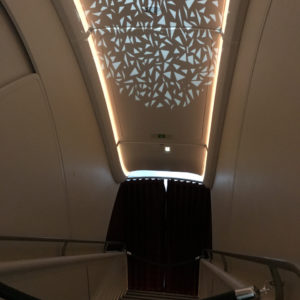 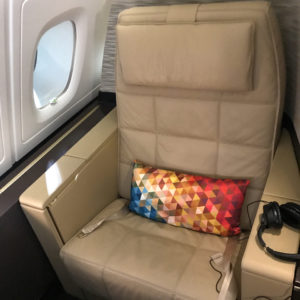 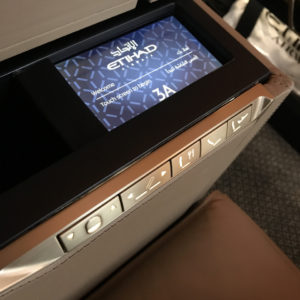 I opted for the Gulf Mezze to as my appetizer followed by Steak Frites along with a Black Cod. The appetizer was very tasty and not too heavy. The steak was cooked a bit more than medium rare, but still a top steak for being at 35,000 feet. Nikkole had recommend I try the cod which turned out to be the best fish I’ve had inflight. It was very light and flaky making it a perfect dish. I couldn’t resist dessert so I went for the Chocolate Millefeuille along with vanilla ice cream. Wow! The desserts I’ve been served on Etihad have always been top notch. Their pastry chefs sure know how to make amazing desserts. 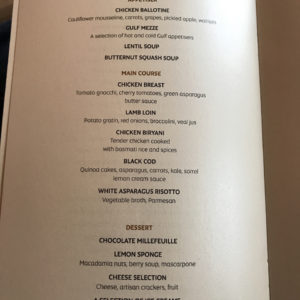 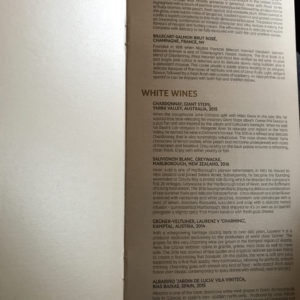 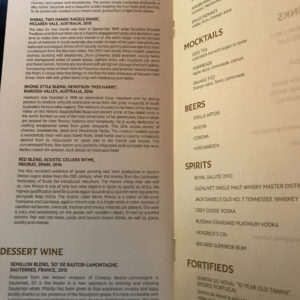 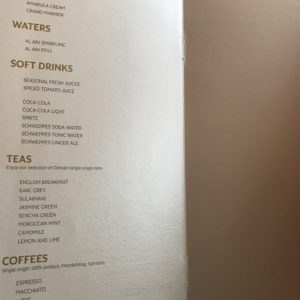 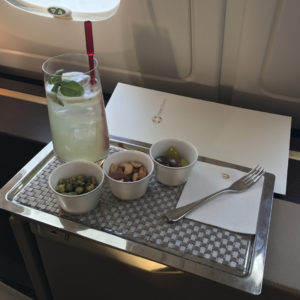 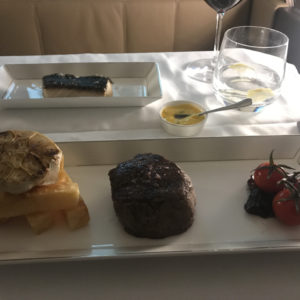 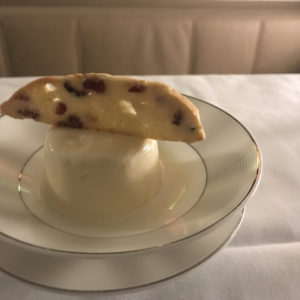 After my meal service, it was time for a shower. Doriana prepared the shower and then escorted me to it. The water has a time limit of 5 minutes, but just like last time it was plenty of time. The novelty of showering inflight won’t get old. It’s so refreshing to grab a shower before heading off to bed. While I was showering they prepared my bed so it was ready when I got out. I jumped into bed and got a few hours of sleep. 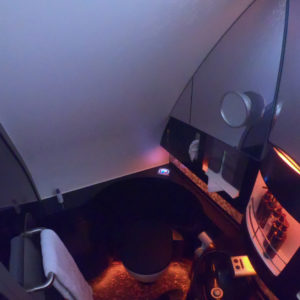 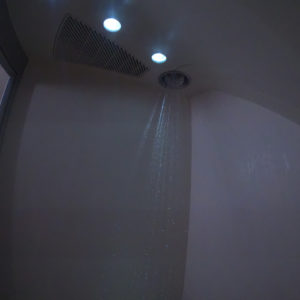 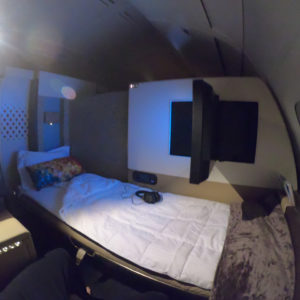 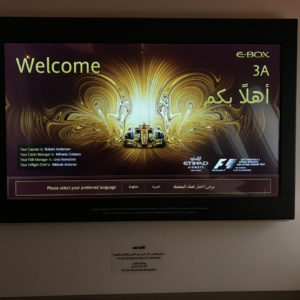 I woke up and watched some live TV. Etihad offers a few channels as well as inflight WiFi offered by T-Mobile. I used the WiFi throughout the flight with no troubles and it ran $19.95 for 180MB which was plenty for a 7 hour flight. Speeds ran around 2Mbps down and 0.5Mbps up. The last time I flew the Apartment, I wasn’t able to test the HDMI port as they don’t provide an HDMI cable. This time I brought one with me and tested it out using my MacBook Pro. I was able to plug it in and mirror my screen in seconds. The quality on the 24″ screen was the best I’ve seen on a plane. Most airlines downscale the image and text becomes unreadable. I tested it with a Word document and it was perfect! Whoever developed Etihad’s IFE has an excellent attention to detail on the technical side. 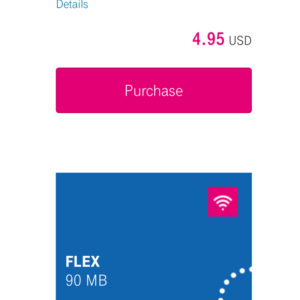 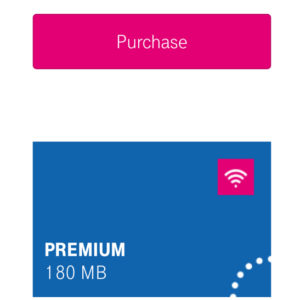 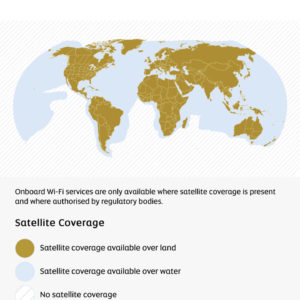 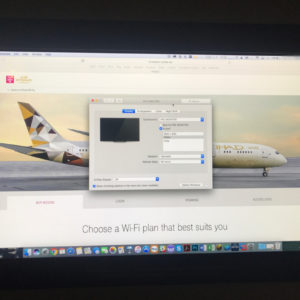 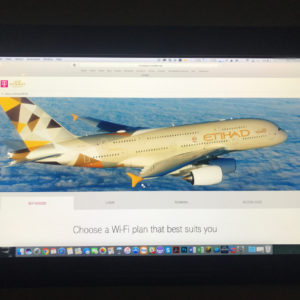 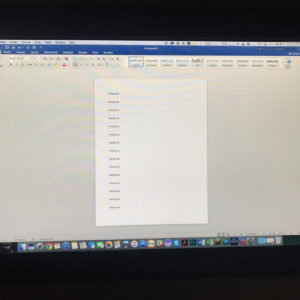 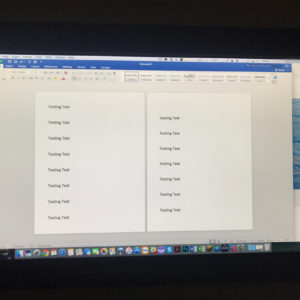 Just prior to landing into Abu Dhabi, I was served a freshly baked cookie along with peppermint tea which is my favorite. We landed into Abu Dhabi on time and off I went to find a lounge to spend my 7 hour layover. I didn’t have access to the First Class Lounge & Spa as your onward flight must be in First Class. I only missed out on the Relaxation Room, Gym and A La Carte Dining according to the lounge agent who denied me entry. The Business Class lounge was more than sufficient.

Conclusion: Etihad Apartment Class still ranks as the world’s best first class product in my opinion! The service provided on this flight was top notch and even though it was a shorter flight than my last experience nothing was left out. The introduction of Emirates new Boeing 777 First Class as well as Singapore’s new A380 First Class in December will definitely make for competition, but Etihad still has a shower to set it apart from these new offerings 🙂 I hope to fly Etihad again soon!