I was excited to try out the Cessna Citation X, the world’s fastest business jet! There was an empty leg deal from Carlsbad, California (CLD) to Monterey, California (MRY) which timed perfectly with a commercial flight I planned to take anyways. This was my 2nd flight during my JetSmarter Trial.

I received a notification around 8:10AM on a Sunday morning for a flight at 9:21PM that night. I quickly texted some San Diego friends to see if anyone could join. The trial membership allowed for 2 seats to be booked at no charge.I was able to book 2 of us at no charge and the 3rd passenger was an additional $270. She was even able to bring her dog on the flight as she has an emotional support certificate. I was flying back to the Bay Area so I only needed a rental car to get from Monterey to Palo Alto. Luckily, National Car Rental services MRY so after booking the car I called the station to see if they could arrange to drop-off the car at the FBO. The lady on the phone said it wouldn’t be a problem. 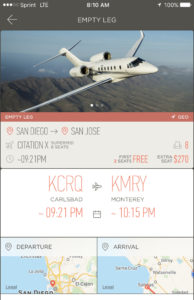 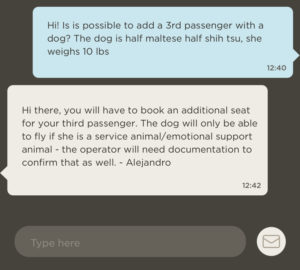 I have flown out of CLD, but on a United flight years ago when they serviced CLD-LAX years ago. The Atlantic Aviation terminal was empty at our departure as it was very late. Our plane was inbound from the East Coast and it would be a quick turnaround for our flight. We were greeted by the co-pilot who checked our ID’s plus the certificate for the dog. There were 2 other passengers on the flight so we grabbed the front set of 4 seats upon boarding and they grabbed the back set of 4 seats. 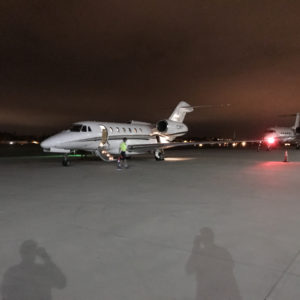 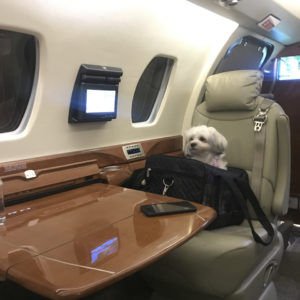 The middle rows don’t recline much as you hit the seat behind you so you’ll want to grab the first or last row of seats if you plane to recline on the Citation X. Take the virtual tour of the interior here as my photos don’t do a justice.

We took off and got up to our cruising speed of 566mph @ 40,000ft in no time. It was an uneventful flight as the pilots closed the partition between the cockpit and the cabin. There were some snacks and drinks available for self service. Upon landing, our rental car was waiting outside on the tarmac. The baggage handler loaded our bags from the plane right into the car. Plane to car in 5 seconds. Amazing! 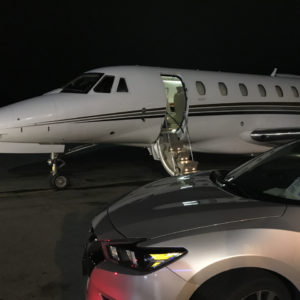