I’ve traveled to Japan a few times now and on my last trip I was able to test out one new method to pay for transportation, the Pasmo card. The Pasmo card is a reloadable RFID card similar to a credit card which allows you to pass through the subway turnstiles without having to buy a ticket for your specific route. Previously, I would purchase a ticket at the ticket machine each time I wanted to use public transportation in Tokyo. Purchasing a ticket would involve know your destination and the cost which I used Google Maps to calculate for me luckily as I can’t read Japanese. It was so nice this time to just flying through the turnstiles just like a local by tapping the card to the turnstile reader. Just make sure you have enough money loaded on it or it will deny you and you’ll hold up the line. I’d recommend starting with a load of $50 USD worth of credit for a 3-5 day trip. You can always reload at any station which I had to do twice as I used it to travel to Yokohama, Kamakura, Yokosuka and around Tokyo.

Obtain a Pasmo card right when you land at NRT or HND airport. Load it and go! You don’t save any money on the fare but you save yourself a ton of time and hassle. 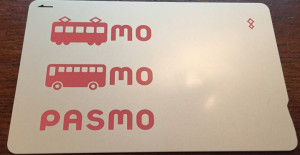