On the heels of Sprint offering Wi-Fi Calling on iPhones, they released an international roaming plan similar to T-Mobile on April 14th. The cost, $0. You’ll recieve unlimited data and text messaging plus voice calls will run only $0.20 per minute with the International Value Roaming plan. Sprint does state that the speeds of the data plans would be very slow at data speeds up to 2G, or 64 Kbps. This is half of what data speeds T-Mobile offers. More details here: http://www.sprint.com/landings/international-value-roaming/.

Roaming in Japan: Since I was in Japan at the time of the release, I decided to give it a try even though I already had a LTE MiFi from XComGlobal with me. I added the plan to my line online through my Sprint account. The next day I saw it confirmed and added to my line. The instructions do state to ensure International CDMA is disabled or else you will end up with a huge bill. Your settings should look like this:

I went ahead and activated Cellular Data, LTE and Voice & Data Roaming on my iPhone. It instantly connected to SoftBank and connected to 3G for data. Initially, I was afraid I’d be charged for data but after a quick online chat the Sprint representative ensured that “due to the plan you have added, the data will be free”. After taking a screenshot of the chat session, I was off to test it further.

SMS text messages started to be delivered and voicemail notifications popped up. My phone was functioning just as it would on the Sprint network. It even allowed a Personal Hotspot to be created but I didn’t test this feature. I don’t have it on my plan here in the US so I was shocked to see the option. The data speeds weren’t being capped or limited to the 64 Kbps as I was seeing a consistent 2,000+ Kbps down and 500+ Kbps up. To help out the non-technical readers, these speeds are as fast as a DSL connection which is enough to use Google Maps, FaceTime Video, FaceTime Audio, iMessage, Skype, etc. Below are Speedtest reports from various parts of Japan: Tokyo, Yokohama, Kamakura and Osaka. 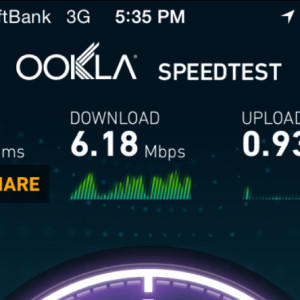 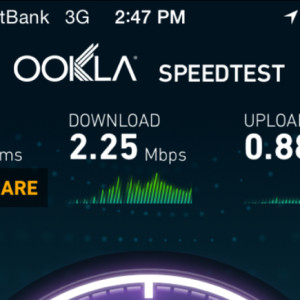 Conclusion: It worked very well in Japan and SoftBank has some of the best coverage (every screenshot had 5 bars of service) I’ve ever seen of a provider. 3G speeds in Japan were faster than most speeds you see with Sprint in the US. If you are a Sprint customer and travel internationally, you’ve just received a major service upgrade at no additional cost. Service is limited to only the following countries but they promise to add more: Mexico, Brazil, Argentina, El Salvador, Guatemala, Nicaragua, Spain, Chile, Costa Rica, Panama, Germany, Japan, Russia, South Korea and United Kingdom. I assume the speeds were uncapped as this is a brand new offering but if they stay fast then I’ll rely on Sprint International Value Roaming Plan for my future travels to the countries it covers. Sprint didn’t charge me as my billing cycle closed and no extra charges even with 900+ MB of data used 🙂

Tip: Sprint does offer unlimited use of voice and data in Japan for just $5/month and this Japan Roaming Add-On plan was just released in December 2014 as SoftBank is the local provider and is a majority shareholder of Sprint. Details of the plan can be found here: https://shop.sprint.com/global/pdf/shop/japan_roaming_add_on.pdf