I transferred 95,000 AMEX points to ANA to book my flights for my trip to Japan, I was faced with no award availability in Business Class on ANA. The transfer time of ~72 hours is always a risk with ANA redemptions using AMEX points. Luckily since ANA is part of Star Alliance, you do have a decent chance of other options. I lucked out and found award availability on Asiana SFO-SEA-ICN and returning ICN-SFO in Business Class. I booked the roundtrip using the 95,000 ANA miles and JPY 38,070 (USD 350) in taxes. I was excited to still have a lie-flat bed for the ~11 hour flights. This same flight would’ve cost 160,000 United miles. Flights from ICN to Japan and back were purchased in Economy for USD 235 roundtrip.

I spent time in the AMEX Centurion Lounge in SEA prior to boarding the flight to Seoul after landing from SFO on United. The lounge was crowded with a waitlist to enter, but they text you when it’s your turn which only took 20 minutes for me. One guest didn’t like that system and the lounge staff was forced to call the police to escort them out. The boarding gate for my flight was S15 which is a satellite terminal and requires using a train to access. I headed to the gate a little early to ensure my bags checked at SFO were checked all the way through to HND which was my final destination.The gate agent wasn’t much help and said to check in ICN at the transfer desk to ensure the bags made it.

Upon boarding I was shown to my seat, 2K. On this new A350, they are using the Smartium Business Class seats. Five years ago I flew this same Smartium Business Class seat on their A380 and it’s proven to hold up in the industry of business class seat designs. With the recent announcement by ANA, they will hold the crown of the best business class seat in the sky starting August 2nd on their London to Tokyo route. A lie-flat bed is the standard I was going for when booking this ticket and Asiana checked that box. The A350-900 is Asiana’s newest plane so it includes all the latest amenities such as satellite WiFi, mood lighting, a quieter cabin and fresher air supply. 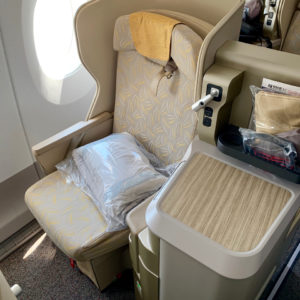 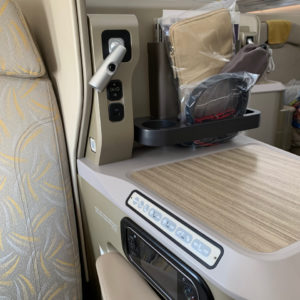 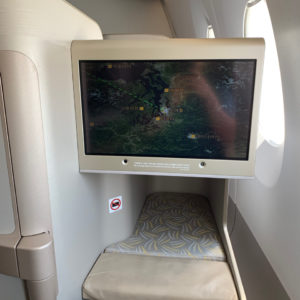 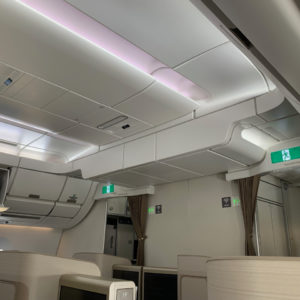 Very Open Ceiling on A350 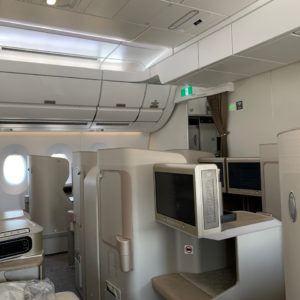 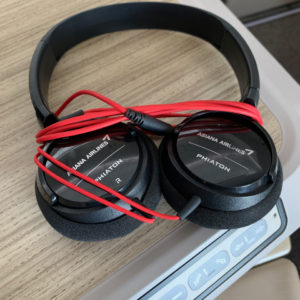 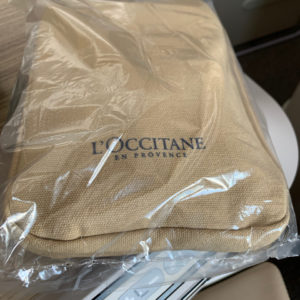 Lunch was served after takeoff (~2:30PM) and I opted for the Korean menu which included Bibimbap. As we were not departing from Seoul, I didn’t have high expectations for the food. I was surprised by the quality of the food as it was delicious and the perfect amount. 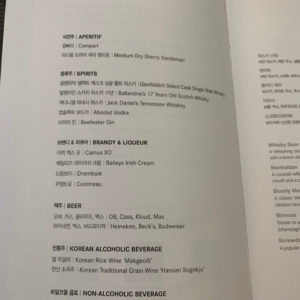 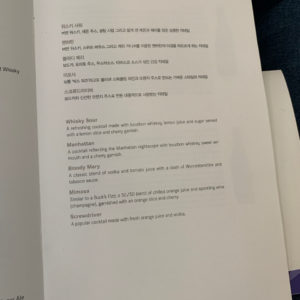 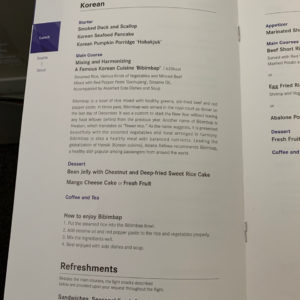 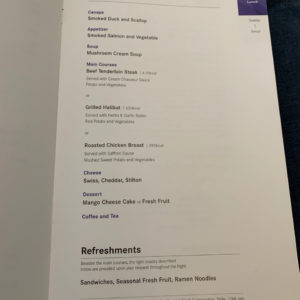 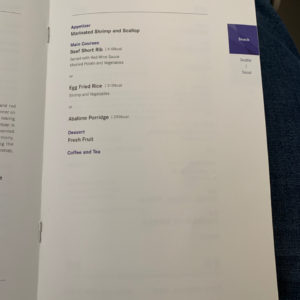 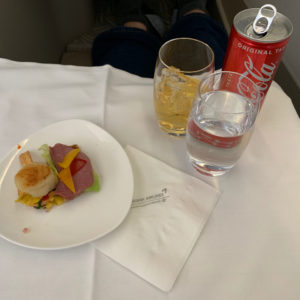 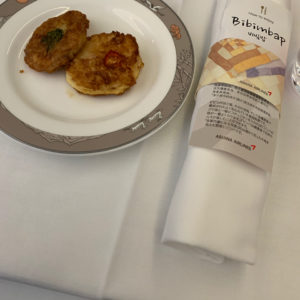 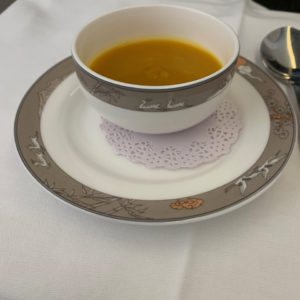 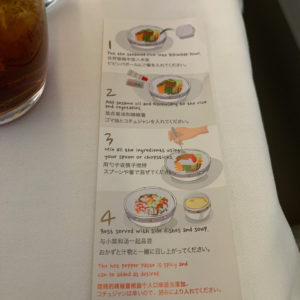 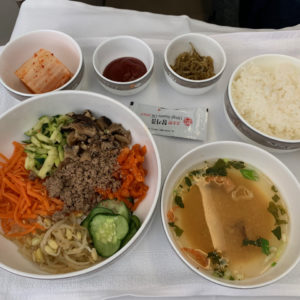 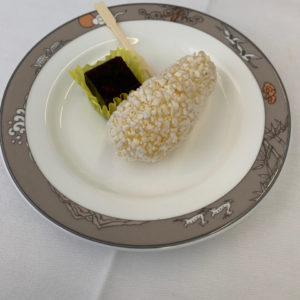 After lunch, I worked a bit using the satellite WiFi which was sufficient with fast download speeds for a satellite connection. Service was provided by T-Mobile (Panasonic) and costs $21.95 for the entire flight with no limits on data. This is the best pricing and value for inflight WiFi on an international flight. 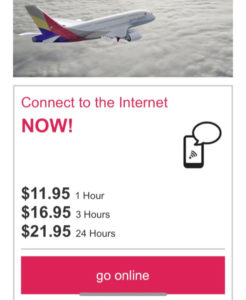 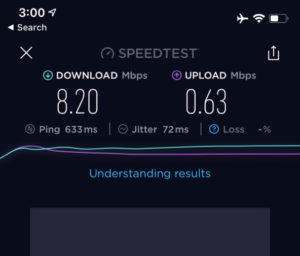 “Dinner” which was listed as a snack menu was served ~2 hours prior to landing. I opted for the beef short rib. Nothing special, but it was a nice snack prior to landing and to start adjusting my body to think it’s dinner time. 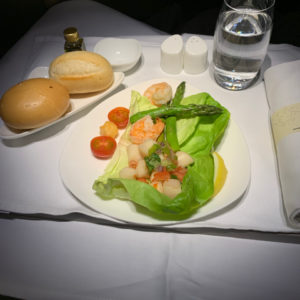 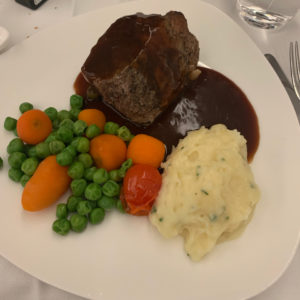 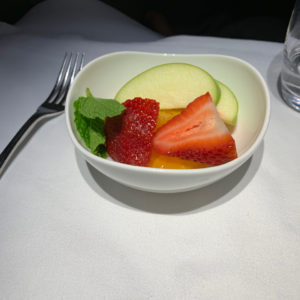 We landed in Seoul about 30 minutes late, but I had a 3 hour layover so still plenty of time. I was able to shower in the lounge prior to jumping on my next flight to Tokyo (HND). 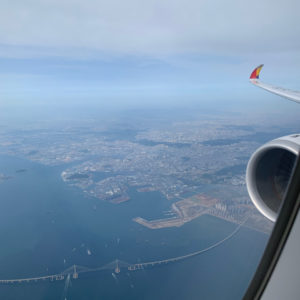 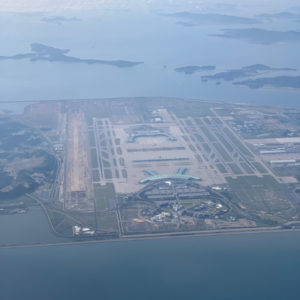 Conclusion: Flying on Asiana’s new A350 with an excellent business class seat makes this option a no brainer if you have to route via ICN on the way to Japan or anywhere else in Asia. I was able to get 7 hours of sleep on this flight which was nice prior to a long night ahead in Tokyo. I’d highly recommend Asiana over any US carrier when flying to Asia. The service was above average, but don’t expect ANA or Singapore Airlines quality.