Surf Air had a promotion late last year offering Elite status members of commercial airlines to try them out for 1 flight at no charge. I was able to book my trial flight from San Diego (Montgomery Field – MYF) to San Carlos (SQL) which was a new route for them. Surf Air operates the Pilatus PC-12NG which is a single engine turboprop so it is slower than a jet, but you do fly at lower altitudes offering some great views. I arrived at Montgomery Field and entered the portable office unit which is the “terminal” for Surf Air. The agent checked me in and then proceeded to weigh every bag I was carrying including my laptop bag, backpack and carryon. I was over the combined baggage weight limit of 30lbs by 20lbs. She mentioned the flight wasn’t full and would get the pilot to sign off on the additional weight. Within a few minutes it was approved. The weight limit must be intended for day trips or short weekend trips with limited luggage. My laptop bag and back pack alone weigh 15lbs. All items have to be checked in and no onboard items are allowed except for a laptop or anything that fits in your jacket. We waited in the makeshift “terminal” until a few minutes prior to departure. 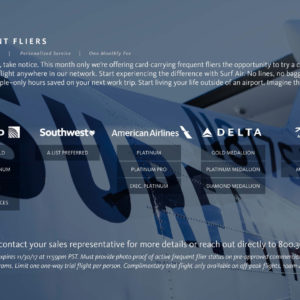 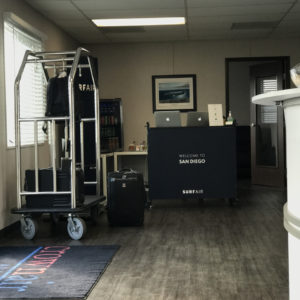 The agent & pilots escorted us to the plane. The flight crew was from Lake Tahoe as well as a passenger so it definitely feels like a small community given they only fly California routes. It was open seating so being first to board is key if you want a rear facing seat in the first row. 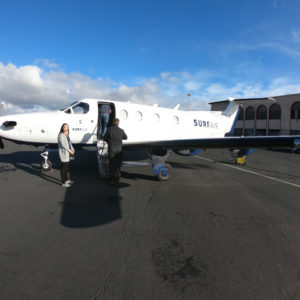 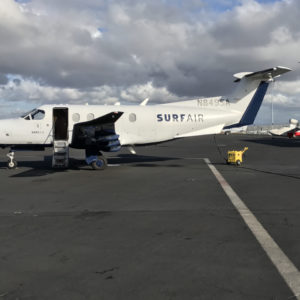 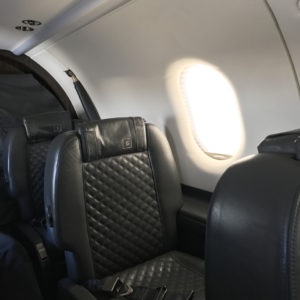 After a few checks, we taxied to the runway and we were off in now time. There was no air traffic at Montgomery Field. We took off to the West and had a nice view of Torrey Pines Golf Course. Reaching a cruising altitude of 24,000ft, we leveled off and cruised up the Coast before cutting in near San Jose and Levi Stadium to line up for a landing at San Carlos airport. We landed after flying for 2 hours. 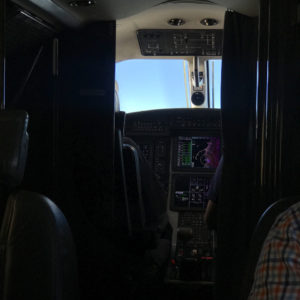 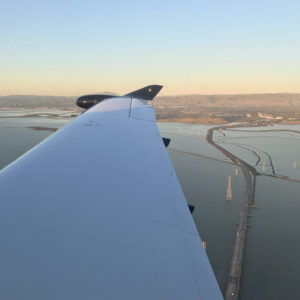 Free snacks and drinks are available at the front of the cabin although it is difficult to get to if you aren’t in the front rear facing seats. There was no inflight WiFi which is a major drawback compared to other private flight I’ve taken. Surf Air typically has short flights and it hasn’t been a request many flyers have had. Given this route is 2 hours of flight time, I wouldn’t fly during business hours if you need to be connected. I didn’t prepare for no WiFi so I was a bit bored and should’ve had my noise canceling earbuds in as the turboprop was noisy.

Upon landing @ SQL, I was greeted by William after stepping off the plane. He wanted to see how my first flight went and explained more about the plan options and routes they offer. I mentioned I don’t fly enough intra-California flights to justify a membership at the moment, but will keep it in mind for the future. Late last year, Encompass also took over Surf Air so it will be interesting to see if that changes any of their offerings.

Conclusion: The service was amazing and the airports are super convenient. Offering inflight WiFi and Bose noise canceling headphones could improve the experience. I wouldn’t hesitate to fly them if the price is right. The current membership is $1,950 per month for unlimited flights.