I originally was scheduled to fly nonstop from Tokyo Narita to Jakarta in First Class, but Japan Airlines (JAL) decided to downgrade the plane to a B787-9 for that route which meant I would lose First Class. American Airlines allowed me to reroute my award ticket via Bangkok in order to experience Japan Airlines First Class. No change fees and no extra taxes, but I did have to feed the phone agent with the exact flight #’s I wanted for my new route which had award seat availaibility. My new routing was HND-BKK-HKG-CGK and included an overnight stay in Bangkok which was fine as I just stayed with my local friends. The BKK-HKG-CGK segments were on Cathay Pacific in Business Class and included one segment on their new A350. Not a bad reroute for 40,000 American miles and $22.60 in taxes!

After staying at The Prince Gallery Tokyo Kioicho, I grabbed a train to Haneda. It is much cheaper and easier to get to than Narita as originally scheduled. The transit time was only ~30 minutes and cost around 600 yen. I checked my bag in via the First Class line all the way to CGK (Jakarta) and off I went to the JAL First Class Lounge. The lounge was offering Laurent-Perrier Cuvee Rose champagne to celebrate the start of Cherry Blossom season so I had to try a glass. The food and drinks were both excellent which included Hibiki 17yr. Free massages are available but be sure to signup once you enter the lounge as the waitlist builds up quickly. I almost missed out! They offer shoeshine service in the Red Suite along with a foosball table and champagne/sake tastings. It’s worth exploring the lounge. 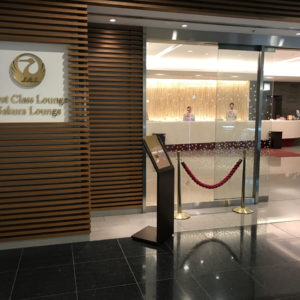 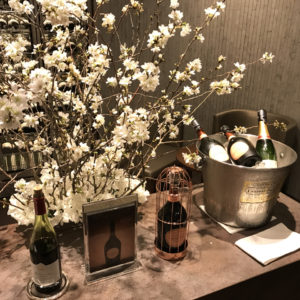 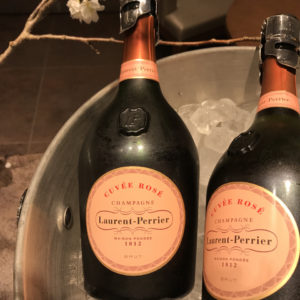 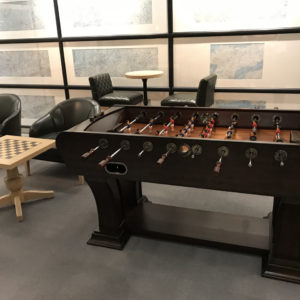 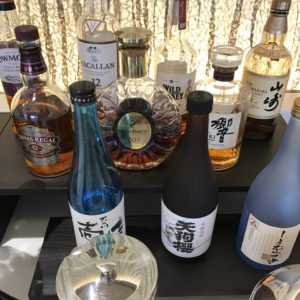 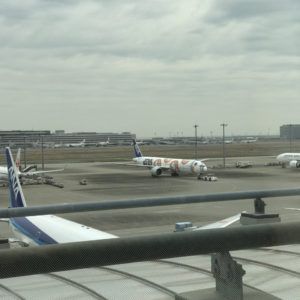 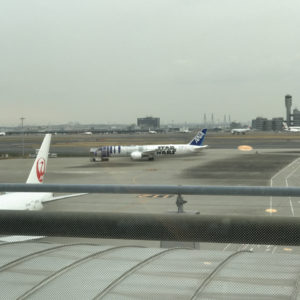 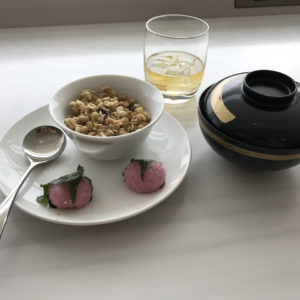 After my 10 minute massage in the lounge, I headed to my gate to board. The boarding lines were massive as First Class boarded with the Diamond/Emerald elite members. This might be why they swapped the 777 over to the Bangkok route for the month of March with such a premium load. Upon boarding, I found my seat 1K which is blocked for VIP guests or if you are an Oneworld Emerald you can get the seat assignment at checkin if available. My initial seat was in the center, but I politely asked at checkin if a window seat was possible. A quick phone call by the agent confirmed my new window seat. The flight attendant brought by champagne, a hot towel and a WiFi access code. The WiFi access code was valid for unlimited usage for the entire flight which was very generous. The only limitation is that it’s only valid for 1 device. I wanted to connect both my phone and laptop so I asked for a 2nd card. The flight attendant returned with a 2nd card just before takeoff. Amazing service! You’d never see that on a US airline. Bose noise-cancelling headphones, slippers and a Loewe amenity kit were already at my seat upon boarding. We took off around 20 minutes late due to air traffic control delays but I didn’t mind as I was flying JAL First Class. 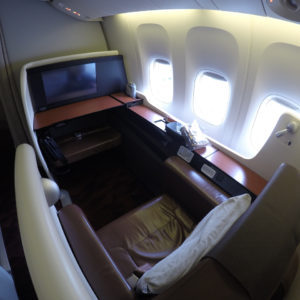 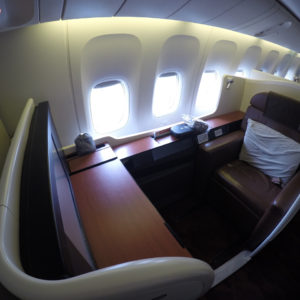 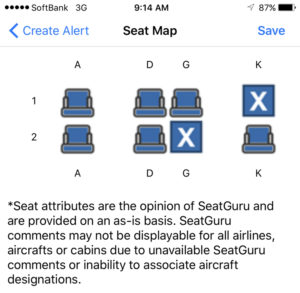 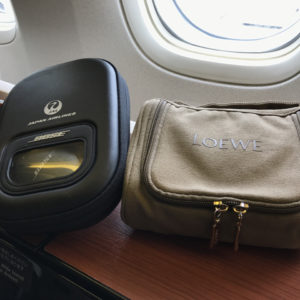 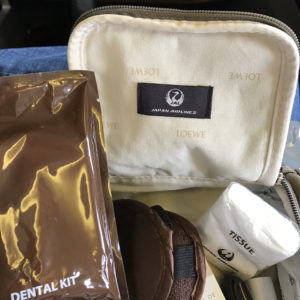 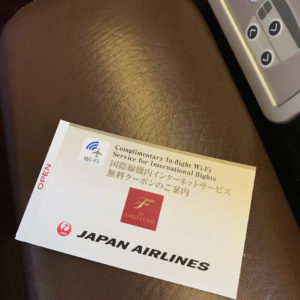 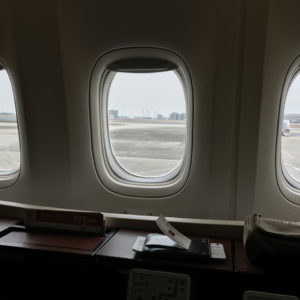 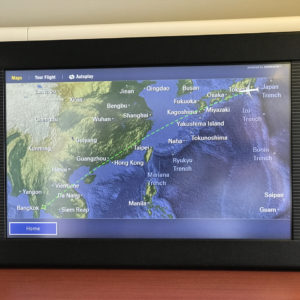 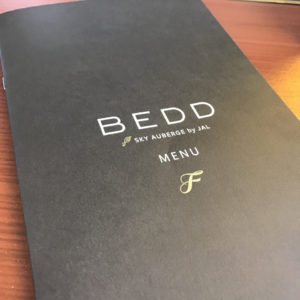 Immediately after takeoff, they handed out pajamas started meal service which was lunch. I decided to relax and change into my pajamas prior to lunch. The flight attendant hung my clothes which is a nice touch. I opted for the Japanese option as we were departing from Japan and flying in First Class. You should always try the local cuisine of where the flight originates from as long as it sounds appetizing. The meal started with an amuse bouche accompanied with a glass of Chardonnay Japanese wine from Coco Farm Winery. It was followed by seasonal five colorful delicacies which were presented very traditionally. I was extremely satisfied with the main dishes of sashimi seafood and braised beef. For dessert, I was served a Lychee and Strawberry sherbet, Pistachio cake and a pudding. The Japanese Style Baked Pistachio Cake which was amazing and just the perfect size. To top off the meal service, they served a Jean-Paul Hévin Chocolate. Wow! 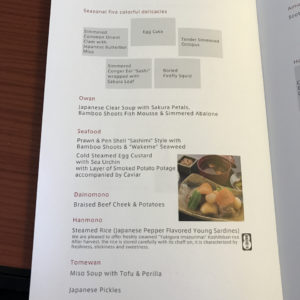 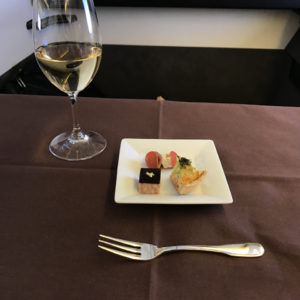 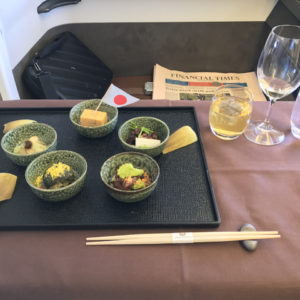 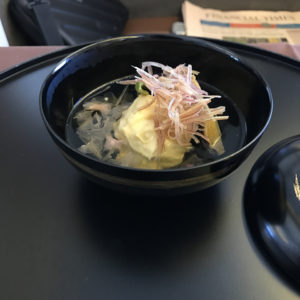 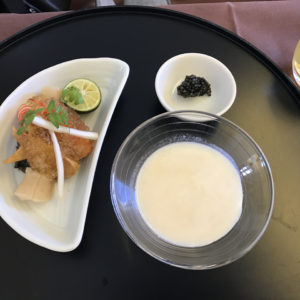 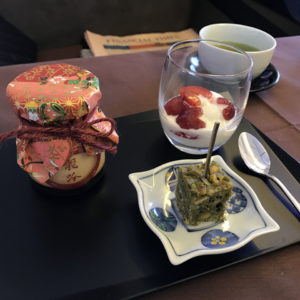 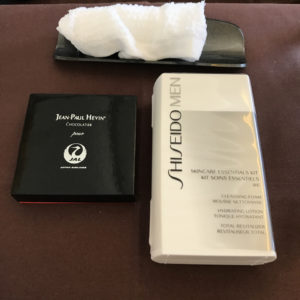 WiFi service was decent as they use T-Mobile for the satellite connection which offers download speeds around 2Mbps. I caught up on emails after lunch and then decided to grab a 3 hour nap before a long night in Bangkok. The flight attendant made my bed and asked if I wanted a firm or soft mattress pad. I selected the soft pad. The bed was excellent! Not as good as Cathay Pacific First Class but very close. The cabin was fairly warm so I didn’t use the duvet. The long pajamas were plenty. 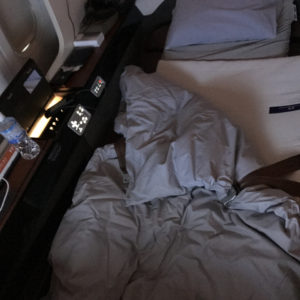 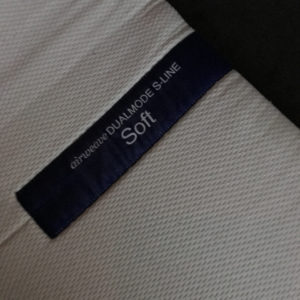 We landed into Bangkok around 15 minutes late, but I was well rested and ready for a fun night out! Premium lane cards were handed out to expedite customs entry in Bangkok.

Overall: Amazing service, food, seat and crew despite some language barriers! If you have the miles/points to fly JAL First Class on their B777-300 give it a try. The Japanese food and service are perfect. Unfortunately, Japan Airlines no longer offers First Class service for intra-Asia routes so I was lucky to be able to experience during a quick trip in SE Asia. I wouldn’t hesitate to fly them again on a longer transpacific route.