It’s been a busy year of traveling in the first 6 months of 2016. I’ve surpassed 75 nights at Starwood Hotels worldwide thus far. I received the following email after hitting 75 nights and can’t wait to earn more SPG points. I can always use more SPG points so earning 4x per dollar spent on hotel stays and Uber’s during my stays is a nice benefit. The Your24 benefit is not that useful as hotels are denying my requests stating high occupancy. The next major milestone is 100 nights this year where I’ll be assigned an Ambassador which should happen by September. I still highly recommend SPG hotels even though the upcoming merger with Marriott might change things. 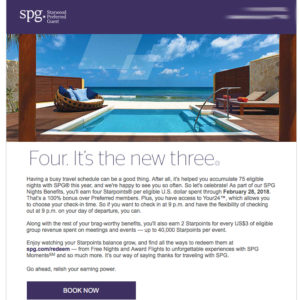 After 75 eligible nights:
▪ Earn 4 Starpoints for every eligible U.S. dollar spent — a 100% bonus over the Preferred level, and the richest earning bonus in the hotel industry.
▪ Your24™ — have the flexibility of choosing your check-in. For example, check in at 9 p.m. and check out 9 p.m. on the day of departure.
▪ Plus, earn 4 Starpoints per dollar spent with partners like Uber.

How many nights have you stayed in hotels this year? Comment below…