Silvercar is a rental car startup company which started in 2012 and headquartered in Austin, TX. They’ve raised $60M to date with the latest round of financing led by Audi. I was excited to try out the new company as they only offer 1 model which is an Audi A4 Premium Plus model in Silver. The cars are fully loaded with an onboard WiFi hotspot, toll transponder, premium sound, backup camera and all wheel drive (quattro).

When I arrived at MIA airport the mobile app provides you all the instructions on how to pick up your car. I took the MIA Mover to the rental car center and texted Silvercar that I was in transit. Once I arrived to the rental car center there was my the driver from Silvercar waiting for me at the curb. He loaded my bags into the car and drove us to the Silvercar office. We reviewed all the details after I scanned the QR code on the windshield and inspected the car. The car he picked me up in was my rental. Super convenient! I was off in the matter of 2 minutes. 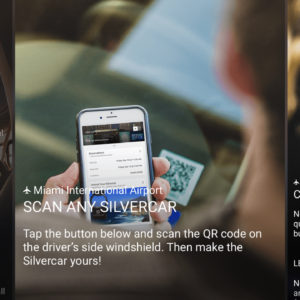 Scan the QR code to Check In 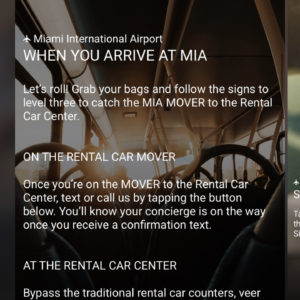 Driving in Florida there are many toll roads so it was nice to have the toll transponder with the car and no fee to use it other than the billed toll fees. All other rental car companies charge a daily fee to use the toll transponder. I didn’t use the WiFi as I carry a VZW MiFi while I travel but it was a cool feature to include at no charge.

Returning the car was just as easy as picking it up. I filled it up with gas down the street (if you forget they will fill it for only a $5 fee plus actual price of the gas) and returned to the rental office. When I pulled into the lot, the Silvercar employee hopped in the car and then drove me to the terminal which was nice not having to take the MIA Mover. Amazing service!

The car was a blast to drive and I would highly recommend trying Silvercar for your next rental if they service your destination!