I typically don’t review hotels but I love the Virgin brand that Richard Branson has created so I had to give it a try and review it! Virgin Hotels currently is only open in Chicago (opened January 2015) but plans to open future hotels in San Francisco, Nashville, New York, Dallas and Palm Springs. 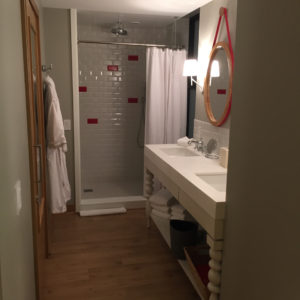 I booked a discounted rate @ Virgin Hotels Chicago through a Virgin America promo which ended up to be cheaper than the AAA rate. Upon arriving via an Uber, I was greeted at the front counter to checkin. The checkin desk was very small and in a dimly lit lobby. I wasn’t blown away at checkin but once I entered the room I knew they were doing something right. The rooms reminded me of the Aloft Hotels which are a vision of the W Hotels, both part of the Starwood Hotels collection. Very modern and clean. Nothing too fancy. The minibar offered “street prices” so they don’t rip you off like other hotels. Every night there are free drinks during happy hour in the Commons Club bar if you are a hotel guest which is a nice touch. For transportation, they offer bikes and a Tesla S but unfortunately the bikes were broken during my visit. The Tesla S will take you anywhere within 2 miles of the hotel from 4-8PM which is very similar to the Acura MDX offering by W Hotels.

The gym was very modern and offered brand new equipment. I’d highly recommend trying breakfast at Miss Ricky’s as there wasn’t a wait and reasonably priced for being a hotel restaurant. The rooftop bar seemed like it would be a fun spot for a Friday or Saturday night.

Tips: Don’t stay in XX01-XX05 rooms due to the noise of the trains running on that side of the hotel. When I was checking out there was a guy checking in mentioning how bad the noise was on that side. I wish I knew in advance as they give you earplugs as it’s that bad. 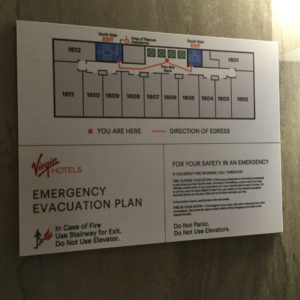 Earplugs due to Train noise

Conclusion: Don’t expect a 5 star hotel but I’d rank it as a mid-range modern hotel with decent service just as I find with Aloft Hotels.