As I’ll be frequently flying this route to Sydney, I decided to try Virgin Australia which is 1 of 4 carriers with nonstop service from LAX. Previously, I flew Air New Zealand to Australia via Auckland but I love the Virgin brand so I had to try Virgin Australia. During the booking process of my Economy ticket I was offered to bid, through UpgradeMe, for an upgrade to Premium Economy which would be accepted or denied 3 days prior to travel. Online reports showed many people paying around $700 one-way to upgrade. I decided to put in a bid at $250. The bid meter said it was a weak bid but I thought it was worth a try. For such a long 15hr flight I really should have bid higher but low and behold it was accepted 3 days prior to my flight. This was the best news of the week! Flying in Premium Economy for only a $250 upgrade was unheard of previously. At the time of booking it was a $2,000 upgrade. Virgin Australia flies a 777-300ER on this route which is best Boeing plane available today for long hauls. 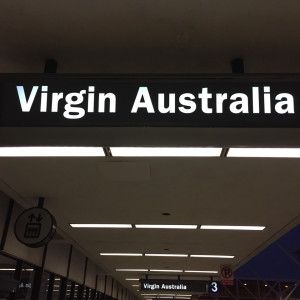 Upon arriving to LAX, I naturally went to TBIT (Tom Bradley International Terminal) but Virgin Australia still does their ticketing in the Terminal 3. After a short walk outside I was able to checkin using the Premium Economy lane which had no wait. I was helped right away and issued my ticket after verifying my passport. My checked bags were already interlined by Delta which was nice so they were checked all the way to SYD. Using the Premium Security lane at TBIT still took a good 20 minutes but I wasn’t in a rush. I grabbed a quick drink at the KAL Lounge and then headed to the gate to board. The KAL Lounge is much nicer in this new terminal building than the old one. Major upgrade! We started to board but not before they announced carry-on bags must weigh less than 15lbs which is an Australian requirement. They even brought out a scale and put it next to one of the ticket scanning machines. Luckily it was only for the Economy class lane and the Business/Premium Economy lane wasn’t checked. I lucked out! After boarding was complete I was shocked to see both seats next to me were open. I was in 13F which is a middle seat in the center section of 4 seats. This made the flight that much better now I had places to put more things and no elbows on the armrests. I was offered juice or champagne prior to take off, I selected champagne and we were off!

After takeoff, we were offered dinner service even though it was 12:30AM Pacific. The local time in Sydney was 4:30PM so they were trying to adjust us to the new time zone. I selected the Chicken entree which was great. During dinner, I decided to watch a movie to keep me up for a bit but I couldn’t stay up any longer so it was time for bed. I used the amenity kit to cleanup prior to bed. The Premium Economy seats reclined farther than Virgin America First Class so it was nice to be able to get 10hrs of sleep after a long week of work. The center 2 seats (E&F) had an armrest that raised about 70 degrees so I made a little pod to sleep in. The mood lighting also made it very easy to sleep as well. After waking up here and there I was able to grab a drink and snacks at the walkup bar. 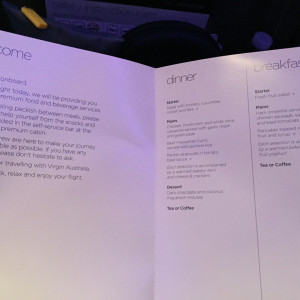 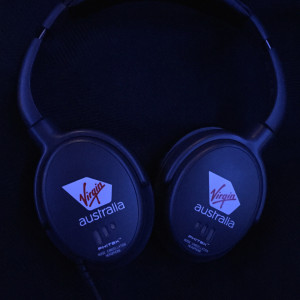 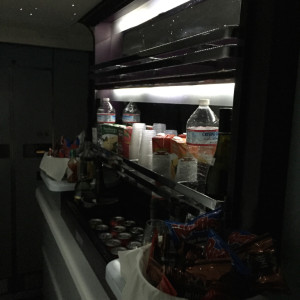 Around 2 hours prior to landing, they offered breakfast. I opted for the omelette which was very good with the chicken sausages. As we landed, the sun was rising and an excellent end to this wonderful flight! I’d highly recommend Virgin Australia for anyone flying the long 15hr flight to Australia from LAX. This was the first time in 2 years that I haven’t flown Business or First Class but Premium Economy was sufficient. Until next time to the Land Down Under…